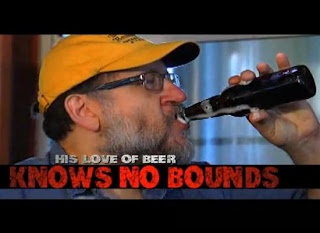 Dead on arrival. Sadly, that was the predictable fate of a recent stab by Greenleaf Productions to produce, market, and launch a 6 episode series to a cable channel about all facets of the "ever growing" craft beer market. It seemed like an exciting concept, and one any beer lover would rally behind. So why did this project fail so epically?

The idea was to raise $60,000 through Kickstarter, a fund raising platform for creative projects. For AAB to go forward, they would need to receive $60,000 in pledges by January 14th, 2012. With Kickstarter, if the goal is not reached,  the money pledged is returned to those who donated to the project. Greenleaf only gave themselves a 60 day window to raise a substantial amount of money. They would need to maintain a steady $1,000 a day pace in pledges over a two month period. When this pace quickly sputtered, a "phase two" of fundraisers was initiated. $60,000 in such a short time frame was a very tall order indeed. The last ditch efforts and late rallies to raise funds were all too little too late.

Was Kickstarter the right way to go? To rely on donations from the public to fund the shooting, editing and marketing of the series to a cable channel is risky to say the least. It appeared that Greenleaf was taking a big gamble here. The troubling part was, they only seemed to be willing to gamble with someone else money. Who is to say that a cable channel the likes of A&E, Travel, or Discovery would even bite at this idea? The answer to that question, might be the reason ABB never really had a chance.

The premise itself. American Beer Blogger? Really? This idea was apparently hatched in a bar. The series would be watching a beer blogger as he called a brewer, or bar owner, or beer store owner/manager, setting up a visit, going there and looking around, asking questions, tasting some beers and having some fun. If you are a beer geek, I am sure you would love to see a series like this. The problem here is, you are playing to a very selective audience. Quite frankly, I don't think the general public would be all that interested in following around a guy who blogs about beer. Not to mention the fact this was done over 20 years ago. The Beer Hunter was a series that aired on the Discovery Channel in the late 1980's. It followed world renowned journalist and author Michael Jackson as he hunted down the world's greatest beers. Following a beer blogger basically doing the same thing Jackson did 20 some odd years ago? It just does not carry the same weight.

This template and format has been used in one form or another over the years with a number of food, drink, and travel shows. A beer related series was attempted just two years ago. Discovery aired Brewmasters,  a series that followed Delaware's Dogfish Head Brewery founder and owner Sam Calagione. Brewmasters was not picked up for a second season. The focus on beer alone is problematic for an objective viewer. That leads to another big reason this project was DOA. The guy doing the blogging.

Who is Lew Bryson? Good question, because outside a small group of beer geeks, or beer industry insiders, no one seems to know who he is.  Bryson is a "free lance" drinks writer that has written about beer and whiskey for years. Sounds like Peter LaFrance. What? You never heard of him either?  My point exactly. Bryson indeed has a blog about beer (he has even authored a few regional beer travel books), but if you take a look, you will see lots of big gaps. "The" American Beer Blogger really does not seem to do a whole lot of beer blogging. He appears to be pretty active on Twitter and Facebook, just not as a blogger.

I'm sure Bryson knows his stuff, and is a likable enough fellow, but the fact he was such an unknown to the public, did not help here. Bryson was not a good choice in my opinion. He is just not a marque name in the beer world. The project only reaching an embarrassing 10% funding says it all really. A "new" Kickstarter  was set at $6,000 the day after American Beer Blogger failed. I see this as a pathetic money grab at the pledges ABB received on the Kickstarter that did not reach the goal. They have reached this goal, made one pilot episode that aired on a local PBS station. Have not heard a peep since.

Greenleaf  seemed to be banking on Bryson and all the industry contacts he made over the years, coming up big with pledge money. That just did not happen. Bryson seemed to have called in all his favors but with few takers. No one (with the exception of one bar owner) really stepped up for him, and that has to be humbling. Bryson even went so far as to make an impassioned plea on his blog (Paying It Forward) that was just shamless pandering for money. While breweries, distilleries, and beer distributors have no problem sending Bryson samples of finished product for review and opinion? They were not so quick to reach into their pockets and pony up the cold hard cash ABB needed to go forward with six finished episodes.

Had Greenleaf gotten someone like Garrett Oliver, a world renowned brew master (Brooklyn Brewery), author, and all around beer expert? A re-tooled version of this project might have had a fighting chance. Bryson just does have the chops to carry a series, and Greenleaf hitched their cart to the wrong horse. A bigger and better known name might have made all the difference here.

I would love to see a series like this, but in this day and age? There is a better place for ABB. Youtube. This kind of thing has been done on Youtube for a few years now, and its done daily. Beertubing and Vlogging about beer can be done quite easily. All you need is a Youtube account, a digital camera and you are off to the races. Video beer reviews, video tours or breweries and distilleries, you name it, and its there on Youtube. Videos dealing with any and every aspect of the craft beer market is there at your finger tips. Bryson might want to try his hand at this. He might find some success, and actually build a world wide audience. Will a show on the beer market ever make it to a cable channel the likes of A&E, Discovery, Food Network, or the Travel Channel again? Maybe. As The American Beer Blogger with Lew Bryson? Doubtful.
Posted by Red Rooster at 2:18 PM