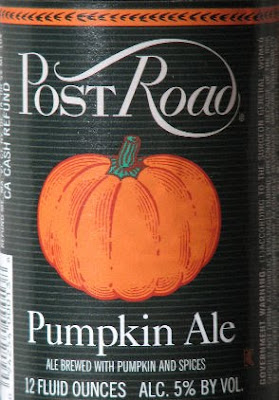 Now here is a beer style that is uniquely American and one that I look forward to every Fall. Pumpkin ale has it roots in American Colonial history and was a style that for centuries had been all but forgotten until the craft beer revolution of the 1980's. The style has been brewed by colonists since the late 17th Century when malt supplies ran short during hard times in the colonies and brewers were forced to improvise. Pumpkins were native and plentiful, especially so in New England, and made for a good fermentable when malt was scarce. In the colony days the pumpkin gourd of choice for colonial brewers, but were used more so for their sugars than for flavor. It is out of this tradition that modern American brewers pay tribute, and these days, you will find many examples of pumpkin beers on the U.S. market.
Post Road Pumpkin Ale was one of the very first commerical examples of pumpkin beer and to this day it remains one of the best. It was first brewed by the Post Road Brewing Company of Framingham, MA which was a contract brewer who had this beer brewed for them by the now defunct Catamont Brewing Company of White River Junction, VT. The label was sold when Post Road went under in the early 1990's and since that time has been owned by the Brooklyn Brewery of Brooklyn, NY. Brooklyn contract brews this beer as well, it it is brewed for them by the F.X. Matt Brewing Company of Utica, NY. This beer has become a Fall classic and is a bench mark example of the style.
Most versions of pumpkin ale, including Post Road are going for the "liquid pumpkin pie" effect and are heavy with spices such as cinnamon, clove, and nutmeg. Some examples feature more of the meaty/squashy pumpkin flavor that would you would find in colonial times. Post Road Pumpkin Ale gives the beer lover a bit both. This is a delicious, hearty pumpkin ale, with great spicy flavors as well as great pumpkin flavors.
Post Road Pumpkin Ale pours to a beautiful, bright, orange color, with a nice white head, and a moderate amount of carbonation. The nose is the first thing that really grabs your attention. Fragrant sweet and spicy aromas of cinnamon, nutmeg, clove, and pumpkin flood the nose. That palate is very flavoful with accents of malt, and meaty/squashy pumpkin flavor. Post Road finishes with more great pumpkin flavor up front, then ends with spicy flavors of nutmeg and cinnamon that lingers.
This is a classic example of pumpkin ale with a very clever use of pumpkin pie spice and real pumpkin. The brewers are not too heavy handed with the spices that really allows those squashy/gourdy pumpkin flavors to come though. Well worth seeking out, this beer is easy to find in U.S. markets during the Fall season and is probably the most popular of all the pumpkin beers on the market today. For more information visit: http://www.brooklynbrewery.com/
Posted by Red Rooster at 12:16 PM No comments: 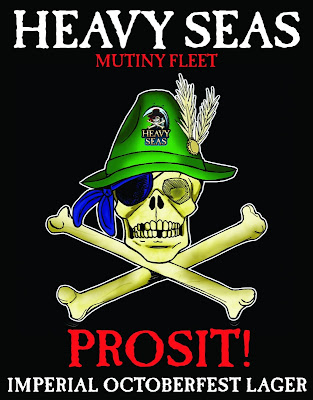 The Clipper City Brewing Company of Baltimore, MD over the years has brewed some truly outstanding beers. This brewery has done a bit of a metamorphosis over the years and its products are now know as the Heavy Seas Beer, though the brewery is still officially Clipper City Brewing. Heavy Seas was at one time the line of specialty beers that Clipper City brewed, but has now become the name of their "fleets" of beer. Now a very pirate themed brewery, Heavy Seas offers three lines of brews:The Clipper Fleet, The Pyrate Fleet, and The Mutiny Fleet.

The Mutiny Fleet line of beers are the biggest and boldest of the Heavy Seas offerings, and they have been very impressive to say the least. Coming in at 8% abv or better, and marketed in 22 oz bombers, these are beers that can be aged and are seasonal releases, only available for a short period of time. I have enjoyed all the beers of the Mutiny Fleet, and one of their most impressive is Prosit! Imperial Octoberfest Lager.
The whole "imperial" thing in American brewing has become a bit over done in my opinion, but in this case I must say it really works. Clipper City brews a beer that for years was called Baltomarzhon, which later became know as Marzhon. That beer is now known as Heavy Seas Marzen and is one of the most authentic, delicious, domestic examples of the style. Prosit! is a bigger, bolder, beefed up example of that truly exceptional beer.
Prosit! Imperial Octoberfest Lager pours to a beautiful, bright, deep chestnut color, with a thick, creamy, white head, and a lively carbonation. The nose on this beer is just fantastic with big aromas, of light toast, nuts, and sweet malt aroma and light grassy hop aromas. The palate is polished and full on the tongue, with big malt flavors. Lots of good toasty and nutty malt flavors glide over the tongue on a very smooth, drinkable body. Prosit finishes with more good toasty and nutty malt aromas, then ends with just the right amount of grassy hop bitterness to balance this beer out.
This is a fantastic example of marzen, just amplified. Very smooth, very round, and dangerously drinkable for a beer of 8% abv. It is hefty enough to stand up to a hearty German meal, but smooth and drinkable enough that you could easily knock back a liter or two of this one. So in that regard, beware because Prosit! packs quite a punch. Available for a limited time only in 22 oz bottles and on draught, this beer is one well worth seeking out. Fresh this beer is outstanding, and that is how I enjoy drinking it. It would be interesting to see how this one would age, so you might want to put a bottle or two in the cellar and re-visit it in a year or so. For more information visit: http://www.hsbeer.com/
Posted by Red Rooster at 12:22 PM 2 comments: