Game Over: 7-Eleven coming out with own brand called Game Day 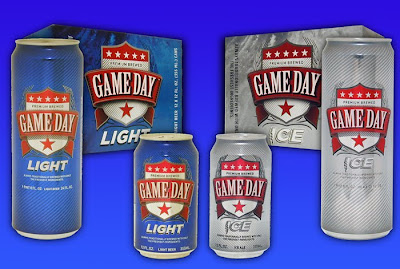 A little late for an April Fool's joke? Sadly this is not a joke. 7-Eleven INC. is getting into the beer market with a store brand lager called Game Day. In the next few weeks an expected 4,200 or so 7-Eleven stores in 17 states will carry Game Day which is being billed as a "premium lager beer at below premium price." They are brewing two different "varieties" Light and ICE. Wow now there are two great choices! You will be able to buy Game Day in a 24 oz single can or 12 packs of 12 oz cans. Oh joy. Suggested retail prices for the 12 packs will range from $7-$9 with the single 24 oz can will go for $1.50 to $1.90 a can.
Bud Light, Coors Light, and Miller Lite are the biggest selling beers in 7-Eleven and 7-Eleven is the nation's third biggest beer retailer. The beer is going to brewed at the City Brewery in La Crosse, WI and 7-Eleven is banking on the low price to get the Bud, Coors, and Miller drinkers to make the switch to Game Day.
Something tells me Game Day ICE is going to be a big hit with all the illegal aliens that gather in front of 7-Eleven. Expect to see lots of Game Day cans littered all over the sidewalk some time in the very near future.
Posted by Red Rooster at 4:48 PM