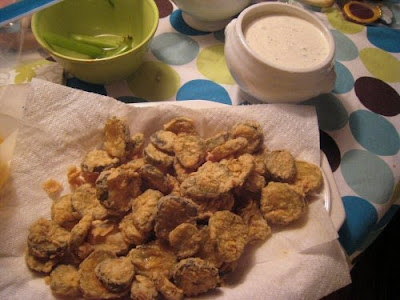 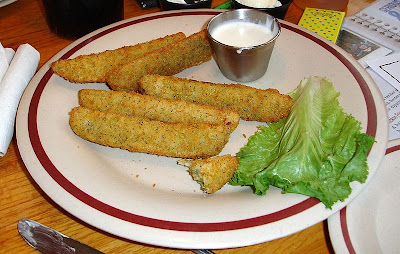 This might be heresy to suggest this, but I think I might have found a bar snack that rivals the Buffalo Wing. I am starting to see these things on more and more menus, and like the Buffalo Wing, this tasty little bar snack was at one time a very regional thing. What I really enjoy seeing is, more and more brewpubs and beer bars are adding these tasty little snacks to their menus. The bar snack/appetizer I speak of is fried pickles.
The history of the fried pickle like that of the Buffalo wing, is a relatively short one. The legend goes fried pickles were first made popular in 1963 by Avery "Fatman" Lindsey when he put them on the menu at the Duchess Drive In located in Atkins, Arkansas. Another account goes they were "invented" in Hollywood, Mississippi at the Hollywood Cafe, when a patron wanted something different and asked asked the fry cook if he could deep fry some dill pickles.
They have been on menus in Southern states for decades, but can now be found from coast to coast, and that is a very good thing. My first experience with the deep fried pickle? As you might of guessed, it was at a brewpub, The Salem Beer Works in Salem, MA back in the late 1990's. I enjoyed them in their spear form, and needless to say I was hooked. The sad part at the time was, few places carried fried pickles on their menus as an appetizer. You really had to seek them out, or make your own. That is not the case any more, and for a beer lover, that is a very good thing.
Fried pickles are just a natural with beer. The combination of the salty and sour flavors from a good quality dill pickle with the hot, salty, texture and flavors of the various batterings, make for one great beer snack. This is not a new concept, anything salty will make you thirsty and you will want to drink more beer. Bars have been offering salty snacks for this very reason for years.
I've enjoyed these both in spear and chip form, both are excellent, but my preference is the dill chips. Fried pickles work well with your standard lager, but I've matched them with a nice hoppy IPA, even dry stouts. Lets not get overly pretentious with this either folks. I know lots of beer geeks are into pairing high end beers with high end foods, and beer and food parings are all the rage with the beer geekery. They might look at fried pickles as being a bit mundane and pedestrian. They are missing the whole point of enjoying food and beer in my opinion. A simple bar snack like this with a nice cold beer is plenty good enough for any beer lover or beer geek for that matter.
So the next time you are out at a good beer bar or brewpub and you see fried pickles on the menu? Give them a try. I will warn you though, these things are addicting, and you will not want to stop eating them. If you can't find them? You can always make your own version. All you need is some good pickles, batter/breading, and oil for deep frying.
Posted by Red Rooster at 2:52 PM