You never seen the sun on the old black rum: Thomas Tew Rum 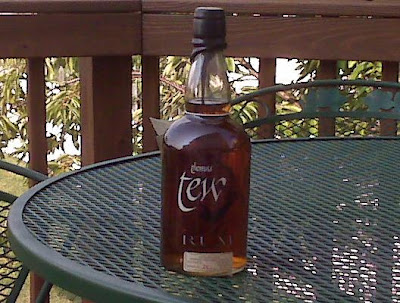 A very interesting, and wonderful thing has happened as the result of the craft beer movement. With the rise of the brewpub and micro brewery, some craft brewers have got into the business of micro distilling and have actually set up small distilleries more often than not in the brewery itself. One such micro brewer/micro distiller is the Newport Distilling Company of Middletown, RI. This tiny micro distillery is also the home of the Coastal Extreme Brewing Company, brewers of the Newport Storm line of beers.

In 2007, Newport Distilling became the first distiller in the state of Rhode Island since the 1842. They are distilling one product at the moment, a rum called Thomas Tew Rum. Thomas Tew also known as the Rhode Island Pirate, was a privateer and pirate who made Newport, RI his home. In colonial times the port city of Newport, RI was home to twenty two rum distilleries. Newport Distilling has brought back that tradition with the production of a rum from Newport's past.

This rum uses black strap molasses and water which is fermented at the brewery which is next to the distillery. The "wash" is fermented with brewer's yeast, and distilled in a pot still 150 gallons at a time. The rum is then aged in American oak barrels, and is "chipped" with American and French oak chips in the barrel. Thomas Tew is then proofed, filtered, and hand bottled. The end result is a very special American made rum.

Thomas Tew Rum pours to a brilliant, deep amber color. The nose on this rum is wonderful, with very fragrant aromas of vanilla, molasses, and light oaky aromas. Those classic "rum" aromas are unmistakable here. The palate opens up with wonderful rummy flavors of molasses, toffee, vanilla, and light oak. It ends with more of those flavors and a warming, alcohol heat that lingers with those wonderful flavors.
This is an outstanding, hand crafted rum with fantastic aromas and flavors. Retailing for $32 a bottle, this is a very fair price for such a quality product. I love the fact that this rum is produced in my home state of Rhode Island, and is a tribute to Newport's rum producing past. This rum of course will work with any number of rum based drinks. That being said, with a rum of this quality, you really want to taste the rum. I enjoy Thomas Tew Rum neat, or on the rocks. It works very well in a Dark 'N Stormy (giner beer and rum) and the ubiquitous Rum and coke. The rum is the real star here, so if you are going to mix Thomas Tew, make it a drink where you can let the rum flavor really come though. If you find yourself in RI, you really should make the effort to find a bottle or two of Thomas Tew Rum, a welcome addition to any liquor cabinet. For more information visit the distillery's site at: