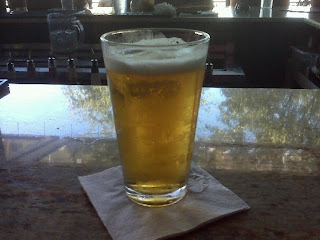 I was able to spend a few months in Southern Arizona recently. That was a very good thing for me as a beer lover, as I got to enjoy a number of different brewpubs and breweries in the Tucson/Phoenix area. It also gave my a chance to get out to Bisbee, AZ and try a legendary brew from Arizona, Dave's Electric Beer. The picture you see is a pint of Electric beer poured at Dave's Electric Brewpub in Tempe, AZ. This beer was not brewed at the brewpub however, this is the original from the brewery in Bisbee. It can be found at a number of local watering holes in Bisbee, and I'm happy to say I drained many a pint of Electric Beer on its home turf.

So what makes Dave's Electric Beer worth seeking out? A lot really. I won't repeat myself, but if you are interested in the history of this beer and the brewery, look here:


This beer has been brewed in Arizona since 1988, and that is pretty long by mico/craft brew standards. It is a testament of how good this beer really is, and how important a role it has played in the craft beer history of Arizona, What I love about this beer so much,  is that it is a local beer, first and foremost serving the local market. If you have ever been to Southern Arizona, you will understand why a beer like this makes so much sense. Electric Beer is basically a helles or pale lager by style, and in my opinion a good example. I would take this beer every time over a national brand or an import from Mexico. Beer geeks don't seem to get beers like this. They will pan them for not being "bold" enough, or average or mundane. Sorry, but like a Bavarian or an Arizonan, I want and need  my daily share of my liquid bread.

Dave's Electric Beer pours to a beautiful, bright, golden color, with a rocky, white head, and a lively carbonation. The nose on this beer is nice, with good crisp, pale malt aroma with light grassy hop aroma. The palate is crisp and clean, with more good pale and pilsner malt flavor, on a very smooth, polished body. This beer finishes with more good, crisp, pale malt flavor up front, then ends with just enough grassy hop bitterness to balance this beer out.

Excellent, easy drinking, flavorful beer. A fantastic thirst quencher in the heat of Southern Arizona, and an awesome beer to have a few pints at one of Bisbee's legendary bars. This beer is what is is intended for, a good, local drinking beer, and I for one love that.