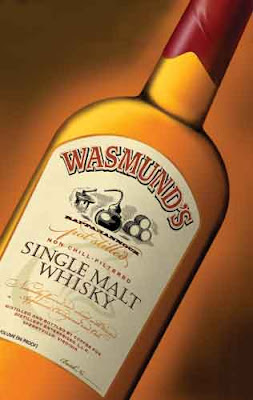 I have always been a big believer in supporting local businesses, and trying to buy as many local products as I can. When it comes to beer, I always drink local, as well as global, and I try to do the same when it comes to drinking spirits. The Commonwealth of Virginia is fortunate to have hundreds of vineyards and wineries with plenty of local choices. Virginia has plenty of microbreweries as well and even a a meadery or two. What many people don't know, even those who live in VA, is the fact Virginia is home to a handful of excellent distilleries as well. If it makes sense to drink local beers and wines, why not local spirits?

The Copper Fox Distillery was established in Sperryville, VA in 2000. This tiny distillery is what has become know in the trade as a microdistillery. Rick Wasmund has a true passion for whiskey, and in the whiskey world is a pioneer of sorts. He is doing a truly amazing thing with his Copper Fox Distillery, and his whiskey is like no other. Rick began his venture into the whiskey world with a six week apprenticeship at the Bowmore Distillery in Islay, Scotland. He returned with what he had learned in Scotland, and Copper Fox was born. Rick has taken the tradition of old world Scotch whisky distilling, and merged that knowledge with new and innovative methods of flavoring and barrel aging his whiskey. Taking a page from Bowmore, Copper Fox is the only distillery in the United States that actually malts its own barley, as well as apple and cherry wood smoking portions of it. The end product of merging the old and new is a truly unique whiskey.
Wasmund's Single Malt Whisky is a singular drinking experience. Pot stilled is small batches one barrel at a time, this whiskey is non-chill filtered retaining the true character of the grain. Barrels are then aged in the warehouse, and numbered bottlings will be a blend of a number of different barrels, with different aging and "chipping" ages used. One of Rick's new innovations is to let apple, cherry, or oak chips steep and and infuse in the barrel bringing their own unique aromas and flavors to the whiskey.
I have had bottlings from batch#6 and batch#26, both have been outstanding whiskeys to drink. Batch#6 is deep golden to light amber in color with peppery alcohol and light smoky aroma, a creamy mouth feel. Flavors of sweet malt roll on the tongue with hints of cinnamon, oak, light smoke, and grain. Sweet malt, cinnamon, and peppery alcohol heat linger as you sip this one. This is a wonderful sipping whiskey to drink neat or with just a few ounces of spring water. The flavor and aromas will open up, making it a wonderful spirit to relax with after a good meal.
Batch#26 is deep copper in color. The nose is bold on this one, with lots of peppery alcohol, aromas of sweet grain, aromas of oak, cinnamon, honey, and grain. Silky smooth on the palate, big sweet malt, light smoke, oak and grain glide over the tongue. This whiskey ends hot, with more sweet malt, honey, and oak flavors, making it very bourbon like.
This is but two examples of what to expect in a bottle of Wasmund's Single Malt Whisky. Retailing for $36-$40 a bottle depending what market you are in, this is a whiskey anyone should add to their liquor cabinet. I was actually purchased a bottle of batch#6 in Rhode Island for a steal at $20 a bottle! I would not recommend mixing this whiskey anymore I would with a fine single malt Scotch whiskey. This is the type of whisky you will want to sip and savor, and enjoy a very unique Virginia whiskey that takes the best of both old and new. For more information visit the distillery's site at:
http://www.copperfox.biz/
Posted by Red Rooster at 10:14 AM