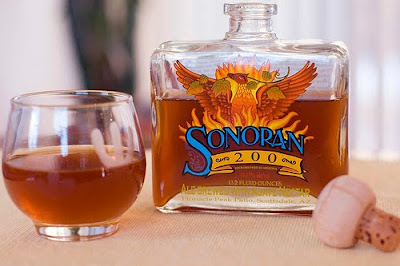 Extreme beer has been a huge trend in the craft beer world for the past 5-10 years or so, and its a trend that does not seem to be going away. I have mixed feeling about this, and I believe some brewers do an extreme beer just because they can, or they are trying to "one up" another brewery who claims the most extreme beer on the plant. I can live without that element of the extreme beer trend. My opnion on that can be found here:

That being said, I truly believe extreme beers have a special place in the beer world, and there are some phenomenal examples of extreme beer.

The Sonoran Brewing Company of Phoenix, AZ is a good example of a brewery doing an extreme beer right, and for all the right reasons. I was fortunate enough to purchase a bottle of their Sonoran 200 on a recent stay in Arizona. Established in 1996, Sonoran Brewing is a very small, local, craft brewer, that is doing some amazing things with beer. I have enjoyed a number of their beers, and this is a very impressive brewery. Sonoran 200 is a great example of what extreme beer should be all about, and yet another great beer from this brewery. From the label:

We have done it again. Brewmasters Scott Yarosh and Zach Schroder are proud to present Sonoran 200, the second beer in our continuing series of Extreme Brews that will we be releasing every 100 batches. Sonoran 200 is produced from 2-Row Malt and pure Agave Nectar. We increased the Agave flavor and sweetness by infusing more Agave Nectar into the brew after the four week fermentation was complete. Then we Oak Age the whole batch for six months until just the right balance of Agave Nectar and Oak flavors were achieved, giving Sonoran 200 its distinctive characteristics.


Agave is a plant that grows in Mexico and the Southwestern United States. Agave is known world wide in the production of tequila. Sonoran Brewing pays tribute by marketing this beer in a beautiful, square, corked bottle, traditionally used with many tequilas. Agave nectar used in this beer, pays tribute to its indigenous Southwestern roots and adds a wonderful sweetness to this beer. Many might not know this, but agave nectar has been used as a sweetener like honey, or maple syrup for centuries. It gives this beer another dimesion of sweetness and make an already fantastic extreme beer, even better in my opinion.


Sonoran 200 pours to hazy, opaque, caramel color, with no head, and no carbonation. The nose on this beer is wonderful, with lots of sweet malt, and agave nectar aroma of toffee , caramel and dried fruit. The palate on this beer is surprisingly lean for such a potent brew, coming in at a mighty 19.37% abv. Flavors of sweet malt, toffee, caramel, dried fruit such as raisin, prune, and fig, glide over the tongue. Sonoran 200 finishes with more of those big sweet malt, caramel, toffee, and dry fruity flavors up front, then ends with a slightly warming and cloying finish that lingers.

This is a very sweet, very strong, satisfying, delicious beer. This is one to sip and savor, and one that would make an ideal desert beer, digestif, or a beer to relax with a good book and a roaring fire. Its 19.37% abv strength is hide well, and it such, a smooth, mellow, sipping brew. A perfect night cap on a cold night in the Sonoran desert. The beauty of a beer like this is, you can drink it in a number of ways. Chilled, on the rocks, warm, room temperature, as a mix, you name it.

Beer geeks might not appreciate its cloying sweetness, but they don't get it if they pan this beer for that fact. Cordials and schnapps are sweet, we expect them to be, and Sonoran 200 should be treated as such, in my opinion. The use of caramel malt and agave nectar has wonderful caramel and dry fruit aromas and flavors that gives this beer big sweetness, in a very good way. This beer is like drinking a liquid Sugar Daddy or dulce de leche. Fantastic stuff. Sonoran 200 retails locally for about $25 a bottle. It is a very rare, very local, very special brew. One well worth seeking out.

For more information, visit the brewery's site at: http://www.sonoranbrewing.com/