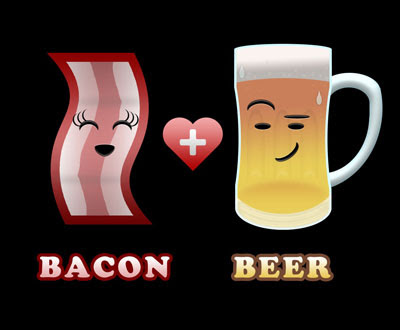 Rauchbier is a German beer style where malt used in brewing of beer is smoked over a beechwood fire. This process give the beer an intense salty, sooty, smoky aroma and flavor, akin to bacon. This style is not for the timid, but for those who love those aromas and flavors in their beer? Its a match made in heaven. Many brewers have followed suit and produce their own example of rauchbier. Others have experimented with other styles, and other woods to smoke with amazing results.

But what about a beer where bacon was actually used in the brewing process? Believe it or not, the idea and concept is not as crazy as you might think, and some adventurous commerical brewers, have started to infuse real bacon in their beer. This might just be a fade, some say a gimmick, but the trend is gaining momentum, especially so on the brewpub level.

How does it happen? The process itself is know as "Fat Washing". Fat washing is mixing a melted fat,  in this case bacon fat, with alcohol, chilling and cooling the mix­ture until the fat solidifies. The mixture is slowly skimmed and strained,  removing the solids and the fat itself.  The end result being total removal of the fat, but the aroma and flavor of the fat (bacon) remains. Basically you are left with a bacon flavored alcohol, and depending on the spirit used, be it vodka, rum, or bourbon, the aromas and flavors of bacon can range from subtle to intense. This technique is nothing new, it has been practiced in the perfume industry for years.

This bacon infused alcohol is then added to the beer some point in the brewing process, along with a nice dose of smoked malts, to shore up the bacon character. This is a true bacon beer. A handful of commerical examples exist, and odds are you are you will find this one on the brewpub level. The Brooklyn Brewery, of Brooklyn, NY has produced a commerical example of a bacon beer called Reinschweinsgebot, a bourbon, bacon infused, bacon smoked brown ale. The Watch City Brewing Company of Waltham, MA brewed up a bacon beer called Smokey Joe Brown that has gained a cult following.


Bacon beer, could it get any beer? As a beer and bacon lover, I hope the trend continues.