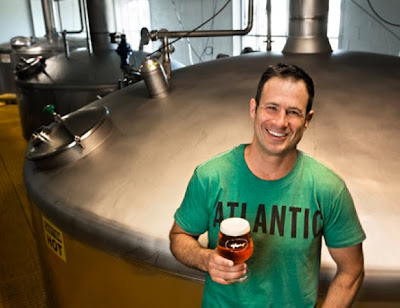 This is long overdue. The Discovery Channel is coming out with a new series this Fall called Brew Masters. The series will be hosted by Dogfish Head Brewery founder and owner Sam Caligione. Should be a very interesting look at beer, the brewing process, the history, the culture. I really wish they had done this one when Michael Jackson aka The Beer Hunter was still alive. I remember meeting and talking with Jackson at a beer dinner 14 years ago and MJ saying to me "I would love to do another series." The Discovery Channel was just not interested at that time, and sadly Jackson, the man who would have been the clear choice for this passed away in 2007. The Beer Hunter aired in 1989 on Discovery, and still is the most definitive series on beer over 20 years later. I wish Sam a lot of luck, I'll tune in, but Sam is no Jackson.

I watched all five episodes of Brew Masters, and while I enjoyed it, it was a bit of a let down to me. It was nice to see the day to day operations of the Dogfish Head Brewery and founder Sam Caligione going on adventures to Peru and Egypt. That being said? It seemed like one big infomercial for DFH. I do not believe this formula is going to work if Brew Masters features Dogfish Head again. I believe a new brewer needs to be featured. Frankly I got a bit tired of Sam and the gang after the third episode.