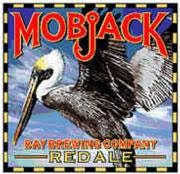 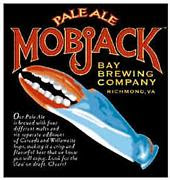 What I like about having this beer blog is it is my place to share my opinions, thoughts, and memories about anything and everything that has to do with beer and brewing. I just might be like the guy walking down the street with tin foil in his hat talking to himself, but I'm fine with that. I like the fact that here I can remember and pay tribute to beers I have enjoyed over the years. I like the fact that I can pay tribute to a brewery that brought me and other beer lovers such great beers. I pay tribute here today.
It is always a sad thing when a local business is forced to close its doors. It really hits home for a beer lover when they lose a local beer that was near and dear to them. The recent closing of the Richbrau Brewing Company, of Richmond, VA sadly got me thinking about another Richmond brewery that closed back in 2003. The Mobjack Bay Brewing Company was a small, local craft brewer that established itself in Richmond, VA in 1997. It produced only about 3,000 barrels of beer a year, and its beers could be found in the Richmond, VA area as well as markets in Northern Virginia.
Mobjack Bay Brewing suffered the fate of many small, local, craft brewers in the late 1990's. The market was at its height, and with so many choices, beers like Mobjack Bay, and countless others got lost on the shelf, or did not get the grass roots local support it needed to continue to grow and thrive. Mobjack Bay brewed outstanding beers. Sadly, that is not good enough in the beer business, and if you don't get the support you need to stay profitable, you will go out of business no matter how good your product is. This happened to far, far too many great, local craft brewers.

I was a huge fan of this brewery, and you would always find a Mobjack Bay beer in my beer fridge. The Old Dominion Brewing Company of Ashburn, VA was my local brewery, but I was drinking Mobjack Bay beers as long as I was drinking Dominion. I started drinking Mobjack in 1998 until they became almost impossible to find in my markets in Northen Virginia. The brewery in Richmond closed around 2003, and Mobjack limped on for a few more years as a contract brewer, and had the Old Dominion Brewing Company, of Ashburn, VA brew their beers, until OD was purchased by Coastal Brewing, and stopped brewing contract beers. The OD examples of Mobjack were credible, but never the same as the Richmond brewed beers.

Mobjack Bay brewed a good rage of beer styles, including a pale, an American red ale, a blueberry wheat, and a stout. All their beers were impressive and flavorful. I would always have the Mobjack Pale Ale or Mobjack Red Ale on hand, and when I could find it, I would enjoy their Olde Coot Stout. Their pale ale was a classic example of the style with lots of piney, citrus hop aromas, a biscuity pale malt and fruity palate, that would finish with great citrus/piney hop bitterness. Their Red Ale was as impressive as the pale with more sweet and caramel malt on the palate, tangy fruity flavors, and like the pale a wonderful citrus/piney hop bite.
Olde Coot Stout was a personal favorite of mine. Mobjack Bay only brewed limited batches of this beer, so when ever I saw it in my good beer store, I would snap up as much as I could. This beer was an outstanding example of a dry or Irish stout, but with an American twist. It was dark, roasty, and coffeeish, but had really great hop aromas and bitterness to go with those big coffee, roast, and dark chocolate aromas and flavors. So fresh and flavorful, this was one impressive beer. Their Blueberry Wheat was Mobjack's tribute to another Richmond brewery that closed before its time. The recipe for this beer came from the original recipe of the James River Brewing Company. It was a wonderful summer refresher, with a wonderful sweet and sour blueberry nose, good tart and crisp wheat malt flavors with a very tasty and refreshing sweet/sour blueberry finish.
I really miss these beers, and this brewery. I guess I can take comfort in the fact that I was able to enjoy their beers for about 5-6 years. I pay tribute to Mobjack Bay Brewing here, but I would much rather still be drinking their beers. Remember to always support your local breweries, or one day like Mobjack Bay, it will be gone.
Posted by Red Rooster at 9:51 AM