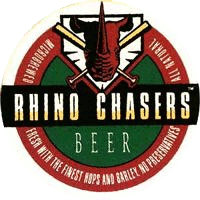 The Lost Rhino Brewing Company the brewers of Rhino Chasers has brewed up a batch of their Pacific Pils and it is currently on draught at Vintage 50 in Leesburg, VA. This beer is a kellerbier by style and was brewed at Vintage 50 as a guest beer. V50 describes it on its beer menu as:
A rich, dense, and creamy head tops this crisp golden lager. Premium brewers' malt create a sweet backbone, but with prominent hop flavor and aroma from noble Halertau and Saaz hops. This "keller" beer is served unfiltered, preserving complex tastes created during the a slow brewing process. Brewed by Ashburn based 28 North Custom Beer Works brewers here at Vintage 50. Like "Rhino Chasers" - the laid back brewers at 28 North are on a similar journey to create the perfect beer. 13.5 Plato 5.6% abv 55 IBU
Think I a trip to Vintage 50 is long over due, and I know what my first pint of beer will be. For more information visit 28 North Custom Beer Works or Vintage 50 at:
http://www.lostrhino.com/
http://www.vintage50.com/
Posted by Red Rooster at 2:59 PM