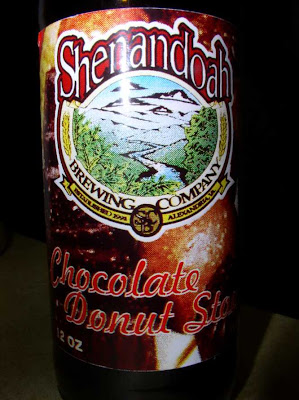 One of the most rewarding aspects of the craft beer movement that has been taking place in the U.S. for the last 30 years or so, is the quality and variety of beer styles that are being brewed. We are very fortunate to have a staggering amount of choices. Small local brewers are allowed to experiment, and are brewing up beer styles that just could not be produced on a large, commercial scale. A great example of what I am talking about is Chocolate Donut Stout from the Shenandoah Brewing Company of Alexandria, VA.
Beer for breakfast? Donut beer? Has to be a gimmick right? Yes and no. While this beer might indeed be gimmicky, it is in fact a very tasty sweet stout, that you guessed it, smells and tastes very similar to a glazed chocolate donut. The brewery calls this beer a double chocolate stout that is brewed with real chocolate, and essence of donut that is added to the beer using a "secret method."
Chocolate Donut Stout pours to a murky deep brown to black color with a tan head that fades, and a moderate amount of carbonation. The nose on this beer is sweet and sugary, with aromas of sweet donut glaze, chocolate malt, dark chocolate, and hints of vanilla. The palate is soft and fat on the tongue with flavors sweet and chocolate malt, dark chocolate, and sweet glaze flavor. This beer finishes with more flavors of chocolate malt, hints of light roast, and more donut glaze sweetness.
This beer is very sweet and a bit one dimensional. That being said, it does taste like a chocolate donut, and that is the whole point of this effort. This beer makes for a unique beer tasting experience, and for the curious is well worth a try. It would work well with deserts, or as a desert itself. Available in select Northern Virginia markets on draught and in bottles, this beer is a bit hard to find, but can be purchased at the brewery. For more information visit: www.shenandoahbrewing.com
Posted by Red Rooster at 10:13 AM