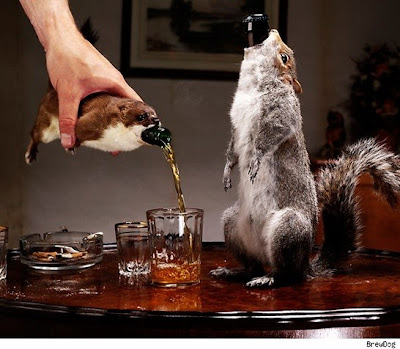 Extreme beers have been a huge trend in the craft beer world for the past 5 years or so. Breweries world wide have been pushing the envelop be it big hops, big malt, big sour, big alcohol. You name it, odds are a brewery has done it, and there is always another brewery out there that is ready to top that with an even more extreme version. The Brewdog Brewery of Fraserburg, Scotland has pretty much ended the game with their latest beer The End of History.


This beer now holds the title of the strongest beer in the world, coming in at 55% abv or 101 proof. Only twelve 33 ml bottles (which have since been sold) were produced, and the beer retails at $770 a bottle, making it the most expensive beer in the world as well. But it gets even better. The End of History is marketed in road kill. Each bottle is marketed in a taxidermied carcass of either a squirrel, rabbit, or weasel.


Enough already. This quite frankly is ridiculous. The point of extreme beer is lost, if what you have is a beer being brewed just because you can, or you are going for some sort of record, to "one up" the next brewery. That is all Brewdog is doing. It has nothing to do with showing "big corporate brewers" the amazing things they can do with beer. I love Brewdog's beers but this is just a pissing contest plan and simple. Evidence of this was Brewdog's extreme IPA Sink the Bismark a 41% ABV beer that was brewed to recapture the "world strongest beer" record that a German brewery had broken.

The End of History is suppose to be based on a Belgian blond ale infused with nettles and juniper. I doubt you will find any beer character in this beer, and the brewery states, drink it as a shot like a fine whiskey. Pointless. If I want a fine Scotch whiskey, I'll purchase one, and pay a lot less than this gimmick of a beer.


Congratulations Brewdog, you have ended the whole extreme beer trend, it has offically "jumped the shark." And in my opinion it is about time. For more information visit: