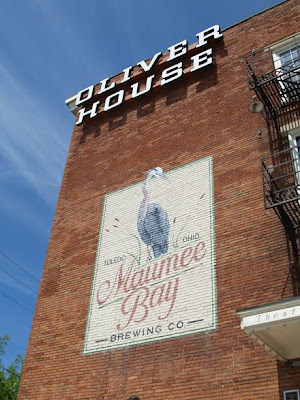 Toledo, Ohio has got a secret. Many might not know this, but Toledo has one outstanding brewpub in the Maumee Bay Brewing Company. This brewpub/microbrewery sells some of its more popular beers under the Major Oliver label, and they have even brought back the long since gone Buckeye Beer, a Northern Ohio staple for decades. But to truly enjoy what Maumee Bay has to offer, one has to visit Toldeo, and the brewery/brewpub itself, one must go to the source.

You will not be disappointed if you do, Maumee Bay is located in the historic 19th Century Oliver House Hotel. The space is absolutely beautiful, sporting one of the most beautiful brew houses you will ever see, a full restaurant, and six full bars on three different floors pouring Maumee Bay beers. Nine beers were pouring on my last visit which includes a golden ale, a red ale, a pale ale, a porter, an English mild, a pilsner, a hefeweizen, an Abbey dubble, and a cask condition IPA. I was floored with the number of beers, but was totally floored with the quality. These beers were all very, very impressive, even more so than I had remembered them.

The food and the atmosphere at Maumee Bay will dazzle you, the beer will stun you. I enjoyed them all greatly, but their Cask IPA really got my attention.This has to be one of the most impressive IPA's I have tasted to date, and I have tasted some of the best of the best, in the hop lavish Pacific North West. This beer gives those hop monsters a run for its money, and then some.

Maumee Bay Cask IPA pours to a beautiful, burnt orange/amber color with a thick, creamy head, and avery soft carbonation. This beer is pulled from a beer engine or hand pump by gravity, and is served at cellar temperature, which is a cool 56-52 degrees.This is important, as the hop aromas and flavors really "breathe" and let you know what a superior IPA should smell and taste like. This beer is hopped with imported(from England) East Kent Goldings aka EKG's, and they are in this beer by the bale loads. The nose hits you from a mile a way. Waves of fragrant, flowery hop aromas flood the nose. It is like sticking ones face in a hop pocket full of fresh hop cones. There is a slight underpinning of pale malt, but hop aroma is the star here. The palate is firm with a solid base of pale malt, with a touch of caramel malt sweetness. The finish is the show stopper. A citrus bomb of hop flavors grab hold of the tongue and just does not let go.

The finish will make you pucker it is so bitter, and for a hop head, that is a little slice of heaven in a glass. Without a doubt one of the most impressive IPA's I have ever tasted, a big league beer from a tiny micro with class and character. If you ever find yourself in the Glass City of Toledo, OH, what ever you do, don't miss the Maumee Bay Brewing Company. For more info visit: http://www.oh-maumeebaybrewingco.com/
Posted by Red Rooster at 7:37 AM