When smoke gets in your beer: Alaskan Smoked Porter 2009 Vintage 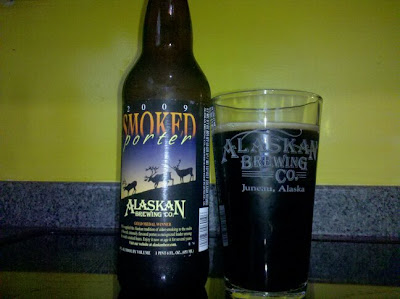 The Alaskan Brewing Company of Juneau, Alaska is a legend in the American craft brewing industry. Establish in 1986, this is one of America's very first brick and mortar microbrewers, and it is one of America's best. Over the years Alaskan Brewing has consistently produced exceptional beers available in only a handful of West Coast markets. I have been fortunate enough to try a number of their beers over the years, and one beer that is truly special is their winter seasonal release called Alaskan Smoked Porter.


This beer has won 18 medals at the Great American Beer Festival since it was first brewed in 1988, making it the most award winning beer the fest has ever seen. This beer is a rauchbier or "smoke beer" by style. Rauchbier is a traditional Northern Bavarian beer style where all the malt, or a portion of the malt used is smoked over a beechwood fire. The smoked malt gives the beer intense salty, sooty, smoky aromas and flavors, that can be shocking to the novice. Being Alaska, and the brewery in Juneau being located next to a salmon smokery, Alaskan Smoked Porter has a portion of its malt smoked over alder wood. Traditional rauchbier is based on a hearty lager such as marzen or bockbier. This beer is an ale, and is based on porter, a dark, chocolatey, roasty English beer style. The used of alder smoked malt in a porter makes this beer very unique and, when it was first brewed, a beer like no other.
I've had this beer on a few occasions both in 22 oz bombers and on draught on a few occasions, and each time has been spectacular. I was fortunate enough to acquire a bottle on a recent trip to the West Coast, and the 2009 vintage is as impressive as I remember the vintages I tried in the mid 1990's and early 2000's.
Alaskan Smoked Porter 2009 Vintage pours to an ink black color, with a rocky, white head that slowly fades, and a good carbonation. The nose on this beer is just awesome, with big, intense aromas of smoky aroma, paired with some hints of roast, but the smoke is here, and in a very big and good way. The palate is firm, with lots of good dark chocolate and roasty coffee flavors, paired with more salty, sooty, smoky flavors that work perfectly with the chocolate and coffee character of this beer. This beer finishes with more good chocolate, coffee, and roast up front, then ends with a very salty, smoky, bone dry finish that lingers.
This beer is phenomenal. Rauchbier is either a style you will love, or you will not. You can really smell and taste smoke in this beer, much like you can in good smoked BBQ. I love the intense smoke aromas and flavors in this beer, and it works so, so well with the dark malt and roasty flavors of a good porter. It is a winter seasonal, but this beer could be consumed year round. It is bottle conditioned, and can be laid down and aged for a few years. It 6.5% abv, it is a hearty brew, but one that is so drinkable. This beer is a fantastic match with a number of hearty dishes. A natural with BBQ, grilled, cured, smoked meats, game, and fish, and of course strong, smoked, and sharp cheeses.
A world class beer that must be tried at least once in your lifetime. For more info visit:
http://www.alaskanbeer.com/
Posted by Red Rooster at 3:11 PM