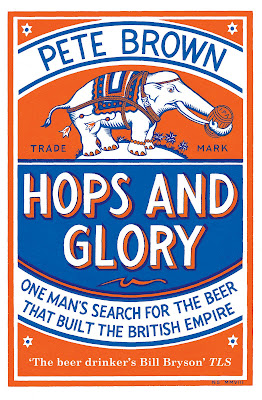 Good news for beer lovers! British author Pete Brown's masterpiece Hops and Glory : One man's search for the beer that built the British Empire is available in paper back as well as hard cover in Canada and the UK. This book can be purchased at Amazon Canada and Amazon UK both in hard cover and paper back for a very reasonable price. More so than Amazon.com here in the U.S. This book is one of the most impressive beer books I have read to date. Beer lover or not, it is well worth the read, and a great book to own. Its that good. Go get your copy here:

Here is my review of Hops and Glory:

In the world of "beer" writing there is the late Michael Jackson aka The Beer Hunter, and then there is everyone else. Since Jackson's death in 2007, the dearth of talented writers on the subject of beer has been painfully felt. The truth of the matter is, good "drinks writers" are few and far between. Pete Brown has changed all that, and has set the bar to "Jacksonian" heights with his latest book Hops and Glory. This book is not only a tale about one of the most beloved and cherished beer styles India Pale Ale (IPA) but a history lesson on 19th Century Burton on Trent brewing, the all powerful East India Company, the history of the Raj, and a personal odyssey.

Brown is a masterful story teller, and he weaves the history of his search for the beer that built the British Empire and love affair with beer into an adventure story anyone would enjoy reading, beer drinker or not. The meticulous research Brown puts into Hops and Glory is amazing. This is a powerful story. Brown puts words into action in this book and the reader learn at his own personal expense. The fact that he actually convinced a Burton brewer to brew up an authentic IPA recipe from the 1800's for him? The fact that he takes said IPA from Burton on Trent via canal to London, and then on the sea voyage route to India the way it went in the days of the East India Company to the Raj? The fact that he just did not talk about it, speculate "what it must have been like" but he actually did it? One has to admire this, and the pay off for the reader is you are along for the ride when you read Hops and Glory. Brown makes you live it, breathe it, you are there with him.

No more tall tales or yarns about India Pale Ale. The story of the history of IPA needed to be told, and what a way to tell it. There are some bumps along the way, and why this book is so awesome is, its not just about the beer and its history, but the reader is living the adventure with Brown. We get the good, the bad, the ugly.

Hops and Glory is a history lesson, travel guide, and adventure story all rolled into one. I literally could not put this book down. It is an enjoyable, informative read, and I'm still amazed that Brown actually made the journey that many have talked about, turn into reality. A journey that will most likely never be repeated by anyone. This is "beer" writing at its very best.
Posted by Red Rooster at 8:41 AM