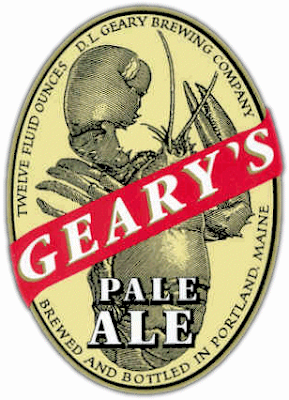 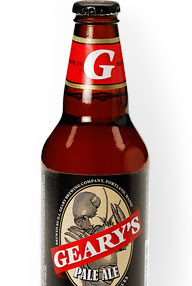 The D.L. Geary Brewing Company of Portland, ME is one of America's first craft brewers, and in my opinion one of its finest. David Geary was a true pioneer when it came to brewing in New England. He incorporated his business in 1983 with a vision of opening a small brewery in Portland, ME for local consumption. This was a novel concept at the time, as only a handful of "brick and mortar" microbreweries existed, most of them being on the West Coast.

Geary went to England and Scotland to learn the craft of brewing beer, and spent the winter months of 1984 honing his skills at six different commercial breweries in those two countries. When Geary returned to Maine, he drew up his business plan, got all his ducks in a row, and got to the task of building a brewery. The D.L Geary Brewing Company opened its doors in 1986 and on December 10th of that year, the very first pint of Geary's Pale Ale was sold. A New England classic was born.

I've been drinking Geary's Pale Ale since about 1991 when I was handed my very first Geary's Pale Ale all those years ago by the legendary Bruguru. Bruguru was ahead of the curve and has been drinking American craft beer from its infancy stages. 19 years later I still remember like it was yesterday being handed a cold bottle of this beer, and that distinctive Geary's label with a Maine lobster on the front of the bottle. When I took my first sip, I was totally floored, and this beer has remained one of my favorite beers of all times.
It is always a fond beer memory. My friend had actually been drinking Geary's since 1987, only about a year after they had opened, so he had been a loyal Geary's drinker when very few people outside of Portland, ME even knew Geary's existed. He has a great story of how he got turned on to Geary's Pale Ale that I just have to share here from Bruguru:
There is a story behind my first Geary's Pale Ale. It was one of my very first visits to Portland, Maine, back in 1987. Gritty McDuff's had not yet opened, and I had yet to visit my first brewpub. Still, I was quite full of myself as a beer lover, and strode into a small convenience store and asked for a six-pack of Sam Adams. The owner, a crotchety old fellow with an exterior as tough as the lobsters Maine is so renowned for, regarded me with a scowl.
"You like Sam Adams?" he asked. "I got something a lot better than Sam Adams."
I assumed that meant he didn't have Sam Adams, but I was intrigued. I asked what that was. He didn't reply, but instead plunked down a six-pack of Geary's Pale Ale on the counter.
I'm glad that crusty old Mainer decided to share a local beer with my friend. Brugru of course went on to become one of Geary's most loyal supports and drinkers, and handed me my very first Geary's Pale Ale. The rest is history.
Geary's Pale Ale a classic example of a British Pale Ale. It is brewed with a very distinctive yeast strain from Hampshire, England called Ringwood. Ringwood gives this beer a very unique earthy aromas and flavors, as well as a byproduct called diacetal, which gives the beer in varying levels "buttery" flavors and mouth feel. You want this character in a classic British Pale Ale, and Geary's Pale Ale strikes a wonderful balance of malt, hops, estery fruity flavors. It is such a flavorful yet drinkable beer, and is just a fantastic beer to drink or to match with a variety of dishes. It is a tradition of mine when ever I visit Portland, ME to enjoy this beer on draught with a twin lobster dinner at Dimillo's Floating Restaurant, which actually sits on Casco Bay. It makes for a wonderful experience, and Geary's Pale Ale is just a natural with lobster.
Geary's Pale Ale pours to a bright, deep copper color, with a nice, white head that slowly fades, and a moderate amount of carbonation. The nose this beer is fantastic with good spicy hop aroma, paired with earthy aromas of yeast. The palate is firm and crisp with a rock solid malt backbone, and light jammy flavors of fruit. The mouth feel is a touch buttery from the Ringwood yeast adding to the complexity of this beer. Geary's Pale Ale finishes with more good malt and light fruit up front, then ends with a long, dry, bitter hop bite that lingers on the tongue.
This is just a world class beer, that has been world class for past 24 years. Its is available in select U.S. markets, and I'm happy to say I have always had access to this beer. It is a beer well worth trying, and one that should be a staple beer in anyone's beer fridge. For more information about this beer and its world class brewery, vist:
http://www.gearybrewing.com/