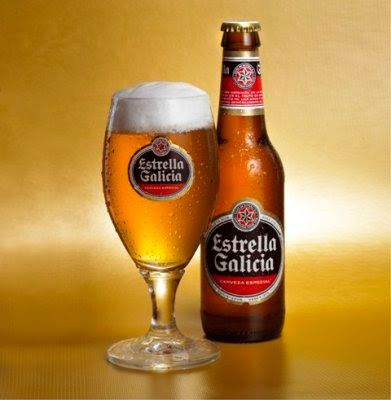 Spain is know world wide as being one of the Epicurean centers of the world. Spanish cuisine is truly world class, and the Spanish eat and drink very, very well. Spain is more associated as a wine drinking nation, and Spain produces some exceptional wines. One might not associate beer with Spain, but a beer drinking culture in Spain does indeed exist, and the drink of choice pouring in the tavernas and served with tapas, in not wine but beer.

In Spanish cuisine tapas are a number of small dish hot and cold appetizers served in Spanish restaurants and bars. They are wildly popular, delicious dishes, and the tradition is to go from tapas bar to tapas bar trying different house specialties, and drinking a lot of beer along the way. Here in the U.S. one can find good tapas at a good Spanish restaurant, and the beer you will always find is Estrella Galacia (Gaelic Star) from the Hijos de Rivera Brewery of A Coruna, Spain. This brewery was established in 1909, and Estrella Galicia is their flagship beer.
This beer is a pale lager by style, and it is a good example in my opinion. It is not the kind of beer that is going to bowl beer geeks over, but is a crisp, clean, refreshing beer, with a good balance of pale malt flavor and mild hop bitterness. It has a touch more body and flavor than your standard Eurolager like Heineken, and maybe it is just me willing this, but it seems to work very well with tapas.
Estrella Galicia pours to a deep golden color, with a thick, creamy, white head, and a good bit of carbonation. The nose on this beer has light herbal/grassy hop aroma paired with some crisp malt aroma. The palate is very crisp, with good pilsner malt flavor and a touch of malt sweetness. This beer finishes with more crisp pale malt flavorful up front, then ends slightly malty and grassy.
This is an enjoyable Spanish lager. The crisp and clean nature of this beer makes it an ideal match for tapas. The carbonation cleans the palate and allows the flavors of the tapas to come though, and the balanced malt and hop flavors work well with a variety of dishes. I recently visited an outstanding Spanish restaurant and this beer really worked well with a plate of jamon iberico. Jamon iberico is a cured Spanish ham from the fabled black pigs of Spain, that is the ham world's answer to kobe beef, or caviar. Salty, rich, buttery, this is phenomenal stuff, and the Estrella cleans the palate allowing you to really enjoy the jamon.
For more information on Estrella Galicia vist:
http://www.estrellagalicia.es/