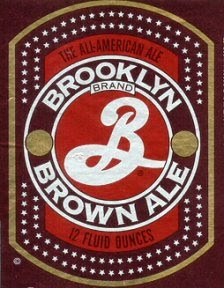 The Brooklyn Brewery and I have a very long and happy history together. Brooklyn beers were some of the very first "microbrews" (remember when we use to call them that?) I started to drink on a regular basis, and they have remained regular, to semi-regular staples for me ever since. The very first Brooklyn Beer I ever tried was, Brooklyn Brown Ale, a beer that I instantly fell in love with, an one that will always be a personal favorite of mine.

Brooklyn Brown Ale is an American twist on a classic English beer style. It is the benchmark example of American Brown, which is more robust in flavor than English Brown Ale. Unlike its English inspiration, it has a very vibrant hop character, in aroma and flavor as well. My first experience with this American Brown Ale, was about 18 years ago, but I remember it as if it were yesterday. "A first", is an experience that lasts with a beer lover a life time, and that experience was an epiphany.

Please, allow me to digress. A college class mate of mine and I use to shoot the breeze after class, and one day he invited me over to his house for a few beers. He had the most amazing living room set up (for a beer lover anyway) I have ever seen. He had built shelves all along the walls of the room, and the room was completely covered in beer bottles. Next to the stairway, he has stacked about nine cases of beer where he would keep bottles and bottles of microbrewed beer in, and in a constant rotation, he would shift them into a college dorm sized refrigerator. I was amazed. At the time, I was a fan of microbrewed beers, but this guy, he was a fanatic. To make a long story short, he handed me my first Brooklyn Brown Ale, and all these years later, I can still remember that first sip, I had a beer epiphany.

I went on to drinking the full line of Brooklyn beers, but I'll never forget my first. I'll never forget Brooklyn Brown. Brooklyn Brown Ale pours to a bright, deep brown color with a creamy tan head, and a lively carbonation. The nose is packed with aromas of sweet malt, a touch of chocolate, some nutty notes, and zesty, cirtrus hop aromas. The palate is firm with good dark malt flavors of chestnut, chocolate, and touches of caramel malt sweetness. Some nice, fruity estery flavors are present as well. This beer finishes with a long, dry, zesty, cirtus hop bite that lingers on the tongue.

Brooklyn Brown Ale is a fantastic beer with great character. You get a lots of good malt and hop flavors, and I really enjoy drinking this beer, and American brown ale as a style. For more information visit the brewery's site at: www.brooklynbrewery.com
Posted by Red Rooster at 5:00 PM