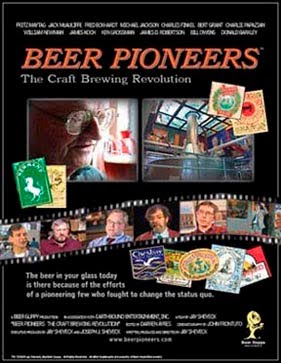 Coming this summer a documentary film called Beer Pioneers. It is the story of the men who started the Craft Beer Revolution in America, and gave us the beer we are drinking today:
Before the 1970s, American beer was "just beer," a big-brand industrially produced effervescent pale lager. However, from the mid-70s through the 1990s American beer witnessed a revolution: handcrafted traditional (and flavorful) artisan ales and lagers appeared on the landscape, made in America, in small breweries.Craft beer wasn't an easy sell. Early craft brewers struggled to change the public's perception of American beer and the big breweries protected their territory. Even so, craft brewers fought the uphill battle, and found their audience. During this craft beer revolution: microbreweries were reborn, homebrewing was legalized, brewpubs resurged, and flavorful craft beer was re-introduced to the consumer in nearly one hundred different styles.Nearly 15 years in the making, this documentary takes an in-depth look into the American craft beer revolution. The filmmaker explores the history and evolution of craft beer, and speaks with the people that made it happen. The program includes dozens of interviews of the early pioneers of America's craft beer revolution, brewers, authors, homebrewers and beer drinkers, along with visits to the historic breweries, and archival footage. TRT: Approx. 110 minutes. Status: In Post ProductionRelease: Summer 2010Format: HDProduced by: Beer Guppy Multimedia, Burbank, Calif.(c)1995-2010 Jay Sheveck, dba Beer Guppy(c)1999 Earthbound Entertainment, Inc.TM: "Beer Pioneers"