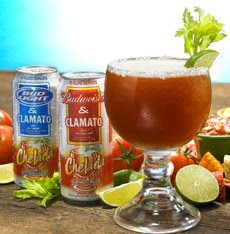 The concept of mixing beer and tomato juice/Clamato juice is nothing new. A red eye has been around for decades and its orgins do not come from south of the U.S. border. For those who do not know what Clamato is? It is basically a cocktail of tomato juice, clam broth, and spices. It was invented in the mid 1960's in New York. Early in 2007, AB which is now AB Inbev the world's largest multinational corporate brewer came up with the brilliant idea of launching a beer/Clamato juice mix and marketing it as Budweiser Chelada. AB rolled this out initially in markets with big Hispanic populations, and marketed it in 22 oz cans. The national roll out came a year later, and you can find this beer and Bud Light Chelada everywhere.
AB, and now AB Inbev is really the pimp of the beer world. They know trends, and they know that Clamato juice has really taken off in Mexico and Central American markets. The demand for Clamato is high, so how does AB get yet another piece of the market? Forget the fact that a red eye has been popular in the U.S. and Canada for decades. Chelada is born. Mott's LLC the corporation that makes Clamato is just as guilty. At one point when you did an Internet search of Clamato it came up in Spanish, not English. They know where their biggest selling markets are, where they are growing, and it is not in the U.S. All well and good, you are in business to make money. That being said, to now market Clamato juice as something that came about from Mexican workers toiling away in the fields or some other nonsense they have on the Spanish verison of their site? It is complete and utter horse shit.
As stated earlier this tomato/clam cocktail was invented in 1966 in Hamlin, NY by the Duffy-Mott Company. Two employees wanted to make a Manhattan clam chowder cocktail by mixing tomato juice, clam broth, and spices. Clamato was born, and it is tangy, salty, spicy, refreshing, and delicious. I'll try any beer once. I love Clamato juice, I have been making my own versions of a red eye for years. How bad could this beer be?
Budweiser Chelada pours to an opaque pink color, with a pink head that quickly fades, and a vibrant carbonation. The nose on this beer is a mix of lime/Clamato which is nice if you like that, trouble is most people don't. The palate is salty with Clamato flavor which pretty much masks any beer flavor. The body is very thin and fizzy. This beer finishes with more salty/Clamato flavor then ends with a hint of lime and salt that lingers.
This is not a very good red eye. If you like Clamato (I love it) it is palatable for that fact alone. The only plus I see about this beer is the convience of being in a can and being premixed. That being said, if you want a thirst quenching refresher in a can? I would rather go with a good ice cold beer, or a ice cold can of Clamato. If you want to make a real red eye, or a real michalada? You would do far better by making your own with a better tasting beer, Clamato, or what ever tomato based juice you fancy. I would not buy this beer ever again, and would not recommend it.