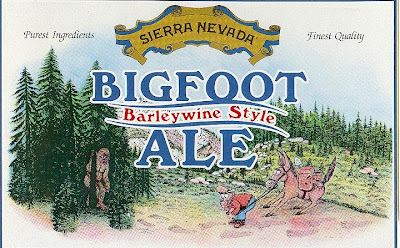 For beer lovers all across the United States, this is a legend. The Sierra Nevada Company of Chico, CA is one of the nation's best micro breweries, and it is one of America's first. Sierra Nevada products have become icons in the beer world, and this West Coast brewer has continued to grow leaps and bounds over the course of their history, enjoying national distribution to all 50 states.

Sierra Nevada really isn't a microbrewery anymore, they have grown big enough to be considered a Regional brewery. SN knows how to start the year out right, and they do so each January, with the winter release of their monster of a barleywine called Bigfoot. Bigfoot is legendary in the beer world, and for good reason. Barleywine, a style that originated in England, has always been a strong, warming, malty beer. Bigfoot is all that, but the brewers of SN did something a little different when they first brewed up this beer. They made their barleywine hoppy as well as strong and malty. Sierra Nevada was the first WestCoast brewer (or any brewer for that matter) to do this with barleywine, other West Coast brewers have followed suit, and many produce a barleywine not only big in malt and alcohol, but also big in hop character. Because of this, "West Coast" barleywine has become sort of an unofficial subset of the style.

The hops, and combination of hops, change in Bigfoot every year, and it is always a hoppy treat. Beer geeks will begin to see Bigfoot sightings start at the beginning of each year, but vintages of this beer can be enjoyed as well because Bigfoot is a beer that be laid down for years like wine. I believe that Bigfoot is a beer that should be consumed young, as that huge smack of hop character is most vibrant. When aged, some of those big hop flavors will mellow, and more complex and malty flavors will come through. Young, or old, Bigfoot is one of the most impressive barleywines you will ever taste.

Bigfoot '10 vintage pours to a beautiful, deep amber color with a thick and creamy tan head and a soft carbonation. The nose on this beer is very complex and aromatic. Big waves of peppery alcohol marry with aromas of sweet malt, fresh bread, and piney hop aromas. The palate of this beer is rich and lush, with a sea of smooth maltiness. Complex flavors of sweet malt, butter scotch, and estery fruit flavors of plum, coat the tongue. The body on this beer is fat and comforting, with a slick and oily mouth feel. Bigfoot ends with more of those complex malt flavors up front, then ends with a very warming (11% abv), piney/citric hop bitterness that lingers.

This beer is phenomenal, and without question is one of the beer world's finest barleywines. Bigfoot is the perfect after dinner drink, and the perfect night cap beer. I wouldn't match this beer with food, this is one you will want to slowly sip and savor. Again, this beer can be enjoyed both young, or with some age on it. I think it is a good practice to drink it both young, and with a few years of age on it. It will improve with age, but if you really want that big smack of hops, its signature character, drink it right away. Beware, Bigfoot is a barleywine, so it is a heady brew, and one you will get in big trouble with if you have more than one or two. For more information visit the brewery's site at: www.sierranevada.com
Posted by Red Rooster at 6:45 PM