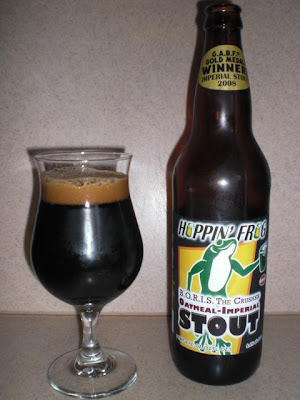 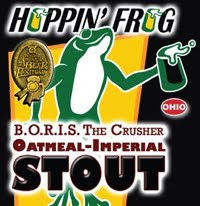 Is it possible to have a crush on a beer? I'm not sure about that, but I know I have enjoyed some beers so much, that I have made pilgrimages to the breweries to try the beer at its source. One such beer was B.O.R.I.S. The Crusher Oatmeal-Imperial Stout from the Hoppin' Frog Brewery of Akron, OH. When I tried this beer a few years back, you could not find it outside of the state of Ohio. Hoppin' Frog has since expanded and can now be found in a number of states. I can enjoy B.O.R.I.S. year round, but it is this time of year when I really love to drink this beer.

This is local beer at its very best. Hoppin' Frog is a very small microbrewery, that markets its beers in 22 oz bombers, and is also kegs for draught accounts in select markets. When I visited the brewery in June of 2009, they were brewing that day, and the crew at the brewery was hard at work. The owner/brewmaster Fred Karm was happy to stop what he was doing to talk to me, show me around the brewery a little, and most importantly, sell me some of his beer. You are welcome to stop by the brewery, usually after lunch time, to buy some bombers (cash only). Hoppin' Frog brews a number of beer styles, I purchased every beer style they had available, including a special bourbon barrel aged version of B.O.R.I.S. The Crusher. And while I was floored by that beer and all their products, I was there for one beer, B.O.R.I.S. The Crusher.
B.O.R.I.S. stands for Bodacious Oatmeal Russian Imperial Stout, and this is one truly amazing beer. This beer is a Russian Imperial Stout by style, but is a unique take on it. Most Imperial stouts do not have oatmeal in them, and this addition gives the beer a silky smooth mouth feel, on a big, bold, flavorful beer. B.O.R.I.S comes in at 9.4% abv and 60 IBU which makes this a very strong beer, with lots of big hop character to stand up to all that big, dark, roasty, and dark chocolate flavors of this beer. This is a very special beer, and it is easy to see why it won a gold medal at the 2008 Great American Beer Festival in the Imperial Stout category.
B.O.R.I.S. The Crusher pours to a jet black color with a thick, creamy, tan head and a moderate carbonation. The nose on this beer is awesome with big aromas of cocoa, dark chocolate, mild roast, and piney hops. The palate is oily and vicious on the tongue, with big, robust flavors of dark chocolate, coffee, cocoa, roast, and more chocolate. The oatmeal makes this beer silky and creamy as it goes down. B.O.R.I.S. The Crusher finishes with more dark chocolate. coffee, and roasty flavors up front, then ends with a good, piney hop bite that lingers.
This is one impressive beer. Very robust, very flavorful, very drinkable for such a big beer. It hides its 9.4% abv very well, so be careful with this one. Don't make any plans if you decide to drink the whole 22 oz bomber. This is one of my all time favorite beers of all times, of any style. This is the ideal sipping beer, perfect for this time of year, and the perfect beer to match with rich deserts. I love this one, and I really love Hoppin' Frog as a brewery. For more information visit their site at: http://www.hoppinfrog.com/