The bar: A love story 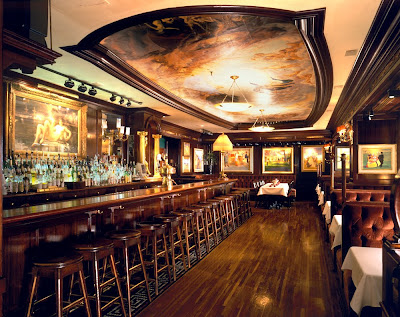 While the Victorian Era ended in the United Kingdom in 1901 with the death of Queen Victoria, its American off shot started around 1876 and continued to about 1915. Also know as the Age of Consumption Americans were consuming many things including beer. It is interesting for a beer lover to look back to see what kind of beer Americans were drinking 100 years ago, and where Americans were drinking it.

Going into beer geek mode here, so if you have lost interest already, enjoy the picture. That is the Victorian era bar at the Old Ebbitt Grill which started its life as a saloon/bar in 1854. Bit of a tourist trap these days, but still a favorite of those who either live and work in the District.
For me beer is best when it is served on draught at a good, unpretentious bar. Brewpubs and beer bars are my watering holes of choice because they offer great quality and variety. That being said, I can enjoy a beer just about anywhere. It is not so much the drink, but where you are drinking it. Drinking was and is a social activity. We can go back to the colonial roots and see a tavern culture. Back in those days people did not drink bottled beer at home, they drank beer at a tavern, ale house, inn, or pub.
As the nation grew so did the saloon, bar and beer hall. Drinking in a bar or saloon was the most popular leisure activity for male workers from the 1870's until Prohibition was enacted in 1919. By 1897 licenced liquor dealers in the U.S. numbered over 215,000. Unlicensed establishments know as blind pigs added 50,000 more to that number. Major cities such as Boston, New York, and Chicago naturally had the highest concentration of saloons/bars outnumbering dry goods, grocery stores and meat markets combined. New York City had over 10,000 bars by 1915, one for every 515 people. Those numbers are staggering when you think about it, no pun intended. What we now as see as most old school bars today, really took hold in this era.
Many bar traditions also took shape. The "free lunch" was born in the saloon when Chicago barman Joseph C. Makin decided to serve a hot oyster with each drink. Other bars followed suit and some bars to this day will still serve free hot dogs or offer something for free at lunch time. While it might seem like a magnanimous gesture, it is actually good for business. Salty foods make you want to drink more, especially so when it come to beer. So the next time you see popcorn or pretzels on a bar? It is there to get you to drink more beer. I'm ok with that because I love to drink beer, and I love to drink it on draught at a good bar. A good bar is so much more than a place to get a drink or beer or whiskey. It really is a sanctuary, a home away from home.