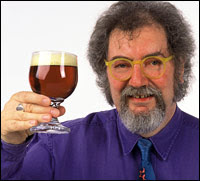 March 27th is a bitter sweet day for me. For anyone who loves craft beer it is an important date to remember. Today is the birthday of Michael Jackson, The Beer Hunter. Sadly Michael left this world far too early when he died in 2007 of a heart attack at the age of 65. The beer world will never recover from the loss of such an influential figure, but what Jackson did while he was here will endure for decades to come.

For those who do not know who Michael Jackson was? In the world of beer, Jackson was and still is a legend. He was an English writer and journalist by trade and one of the best. What made Jackson so important to the world of beer is he was a true pioneer writing about beer, its science, its history, its culture, its folklore, its importance when no one else did. In 1977 Jackson penned The World Guide To Beer which to this day is the most fundamental text on the subject of beer. The modern theory of different beer styles is largely based on Jackson's ground breaking work. Jackson traveled the world finding local beer traditions, beer culture, brewing methods, and shared it with the world. He went on to pen a dozen more books on beer and whiskey. His body of work on the subject of beer is the template for all other definitive works on the subject. His video series The Beer Hunter is "Beer 101". Quite simply, Michael Jackson was, and forever will be the world's leading authority on beer.

Jackson's influence can not be understated. The reason you are drinking a great craft beer today is largely in part to Jackson and his work. The fact that you can now walk into any grocery store, supermarket, restaurant, or bar and find a variety of beer choices? Thank Michael Jackson. He inspired literally thousands of brewers across the globe, and saved beer styles that would have been lost to the world had he not written about them, and brought them back into the light. That is how important Michael Jackson was. He and his work has been so influential, you don't even realize it. What we take for granted was just not there before Jackson sparked the interest in different beer styles, and the reason we have such quality and variety in no small part is due to Jackson and his work.

Today would have been Michael's 68th birthday. I will raise a glass of beer to Michael Jackson and toast the man. I will thank him for inspiring my love for great beer, and to hunt for the world's greatest beers. I am going to go with a vintage bottle of barley wine, a British beer style, one Michael knew well and loved. I'll also drink a few German beer brought back from Germany by a friend. Here it to you Michael. Happy Birthday. You will always be remembered.
Posted by Red Rooster at 7:10 AM