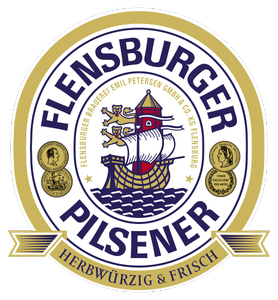 Now here is a beer that I am very sad to say is hard to find at least here in the United States. Impossible to find is more like it, as this beer is not exported to the US. This is a very popular beer, but it is a big fish in a small pond if you will, as it is only popular in a particular region of Germany. The beer I speak of is Flensburger Pilsner from the Flensburger Brauerei of Flensburg, Germany. Flensburg is one of the most northern of all German cities, that its on the German/Danish border. This brewery was established in 1888, and their flagship brew is their pilsner, or as the locals call it Das Flenst.

Northern Germany is known for its pils which really is the German version on Czech Pilsner. German pils or pilnser, tends to have a more assertive hop character than the Czech version, yet remains a very balanced beer. Flensburger Pilsner is a classic example of of a crisp and clean beer, with brilliant hop aromatics and bitterness. Jever is the classic example of Northern German Pils, and is by far, the most popular example of this style. Jever can be found in a number of export markets, including the US, and I am happy to say I have easy access to that beer. Flensburger on the other hand, is pretty much a local beer, and while it enjoys popularity in Northern Germany, odds are you won't find this beer too far outside those Northern German markets.

This is a wonderfully crisp, and hoppy pils, that rivals Jever. It is marketed in beautiful 033l brown swing top bottles, that make a very distinctive"plop" sound when you open them.

Flensburger Pilsner pours to a beautiful, bright,golden color with a bright white head, and a good bit of carbonation. The clarity of this beer is really brilliant, and this might only apply to beer lovers, but it really is a thing of beauty to look at. The nose on this beer is fantastic with lots of vibrant, herbal, grassy aromatics that invite you in. The palate on this beer is fantastic as well, with really crisp pilsner malt flavor on a smooth, round, clean body. Flensburger Pilsner finishes with more crisp malt up front, then ends with a very dry, herbal hop bitterness that lingers on the tongue.

This is a flawless example of German Pils and is lager brewing at its best. Sold, clean, delicious, drinkable beer. Das Flenst is a beer you will want to drink a lot of, and I could see myself pounding this beer with impunity. The only problem for most beer lovers is the fact, you will have to take a trip to Northern Germany to get some. Its hoppy and crisp character, make it a perfect match for a number of classic German dishes, and spicy fare as well. Personally I would not match this one with food. This is a great drinking beer. Sure beer goes great with food, but sometimes you just got to drink beer, and forget about what food goes with it. Visit the brewery's website for more information at :http://www.flens.de/
Posted by Red Rooster at 7:05 PM