Blast from the Past: Great Providence Brewing Company 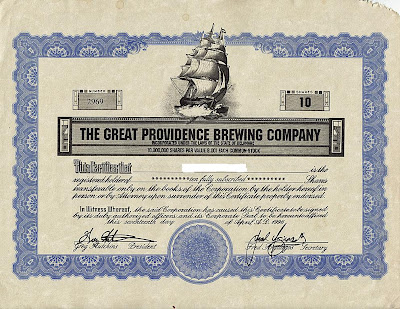 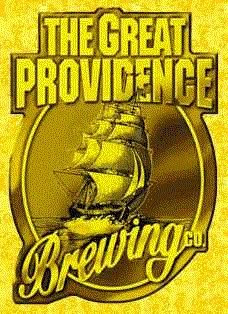 Ever wonder what it would be like to own stock in a brewery? I actually did. Unfortunately for me, the stock was only worth $1.85 per share when offered, and the 10 shares I owned (that I got for free) are no longer worth the paper they are printed on. The year was 1996, and the craft beer boom was at its height. It seemed like anyone and everyone with a business plan and some investors wanted to get in on the craft beer industry. In 1996, two Connecticut businessman thought they could make it in the beer business. They started life as the Great Atlantic Brewing Company in CT, but shifted gears and thought they could find success and build a brewery in Rhode Island. The Great Providence Brewing Company, of Providence, RI was born.

Great Providence seemed like it was going to be a success and the owners seemed to have a sound plan. They offered stock in the company directly to the public cutting out brokerage firms and underwriters. The hope was to generate $2.8 million in revenue though the sale of 1.5 million shares of stock at $1.85 a share. This money would be used to build a 50 barrel brewery in Providence with the initial goal of brewing 50,000 bbls of beeer a year. In the meantime Great Providence would contract brew their beers, and would build brand recognition in the City of Providence. It almost worked.

Great Providence contract brewed one beer, a pilsner by style. Initially this was to be a draught only product, and in January of 1997 Great Providence Pilsner was available on draught at 31 restaurants and bars in the City of Providence. Plans were to bottle this beer as well, and it would be available at liquor stores in RI, CT, and eventually MA. Sadly that never happened. This beer remained a draught only product for a few months, when eventually it started to dissapear. By the end of 1997, Great Providence Brewing Company had went bust.
The worst part here? Great Providence Pilsner was actually a pretty awesome beer. It really was a shame that this beer did not take off, because I remember being floored with how good it was. This beer was a crisp, clean pilsner with outstanding pilsner malt flavors with really fantastic herbal/grassy hop aromatics and bitterness. The body on this beer was so smooth and polished, I was amazed how flavorful yet drinkable this beer was on draught. It was the kind of beer you could drink a lot of, and that perfect balance between flavor and drinkability. Great Providence Brewing is yet another example of what might have been. I guess I could take comfort in the fact that I did have the chance to experience their beer, and will always remember this one.
Posted by Red Rooster at 11:11 AM