A fool for you: Indigo Imp Jester 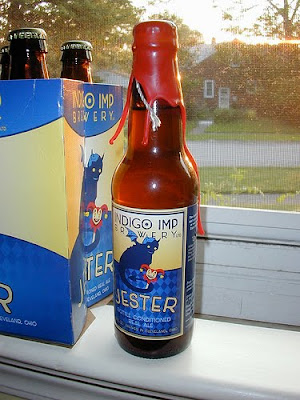 The one thing that I really enjoy most as a beer lover is trying local beers. Beers that can not be found outside their local market, and beers you have to travel to if you want to give them a try. I was happy last year passing though Ohio to find such a brewery in the Indigo Imp Brewery of Cleveland, OH. Established in 2007, this is a very small, very local brewery, that sells its beers in and around the Cleveland, OH area. Unfortunately for me, I was passing through when the brewery was not open, but was able to pick up two of their beers in six packs. They were both very impressive, and I was particularly fond of their Indigo Imp Jester.

This beer is a Belgian Pale Ale by style, brewed with an authentic Belgian yeast strain. This beer has some spicy notes from the yeast, with good malt caramel/toasty malt flavor and mild hop bitterness. Belgian Pale Ale is a very drinkable beer style, Palm and De Konnick are classic examples of the style and Indigo Imp pays tribute with Jester.
Indigo Imp Jester pours to a bright, light amber color, with a soapy, white head that fades and a moderate carbonation. The nose on this beer is spicy and earthy with light aromas of toast as well. The palate is firm, with light caramel and toasty malt flavor on a soft body. Light estery fruit flavors play against the malt character of this beer. Jester finishes with more good light caramel and toasty flavors up front, then ends with a spicy and earthy yeast flavor that lingers.
This is a flavorful, drinkable beer, and a nice example of Belgian Pale Ale. I enjoyed this beer very much, and would take it over New Belgian Fat Tire, which is the most available American example of the style. If you want to try this one, you will have to come to Cleveland. For more information visit the brewery's site at: http://www.indigoimpbrewery.com/
Posted by Red Rooster at 11:31 AM