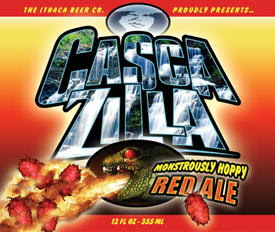 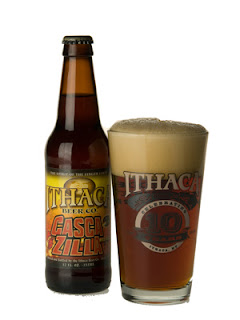 Now here is a monster of a beer. A few years back I visited the Ithaca Beer Company, in Ithaca, NY. This is an outstanding little brewery, and every beer I have had from Ithaca has been impressive. One of my favorite beers from this brewery is their American red ale simply known as CascaZilla. This beer gets its name from a gorge in Ithaca known as Cascadilla and the "monstrous" amounts of Cascade and Amarillo hops used in the brewing of this beer.

Hops are the seasoning in a beer, the more hops used at different stages of brewing, the more aromatic, flavorful, or bitter a beer will be with hop character. Cascade and Amarillo hops are know for their zesty citrus aromas, flavors, and bitterness, and they are in this beer by the bail load. What I love about CascaZilla is that huge hop character is balanced with the use of a generous amount of caramel malts, giving this beer is beautiful red color, but also some malt sweetness to stand up to all those hops. So what you have here is an excellent example of a hoppy American red ale, with lots of big hop aromas, flavors, and bitterness, with some good malt character as well.
CascaZilla pours to a beautiful, bright, deep amber to ruby red color, with a tall, off white head that fades, and a moderate amount of carbonation. The nose is just fantastic on this beer, with lots of zesty aroma of lemon peel and grapefruit. The plate is firm with some good sweet toffee flavors paired with a very nice, tangy lemon/citrus hop flavor. This beer finishes with more of those good toffee and citrus flavors up front, then ends with big smack of grape fruit and lemon hop bitterness that lingers.
Very impressive beer with tons of character. At 7% abv, this is the kind of beer you will want to sip and savor. It makes a great aperitif beer, would work well with a number of dishes, and is a great beer to have after a long hard day at work. Well worth seeking out if you can find it in your market. For more info visit: http://www.ithacabeer.com/