This is a test. This is only a test: Guinness Black Lager 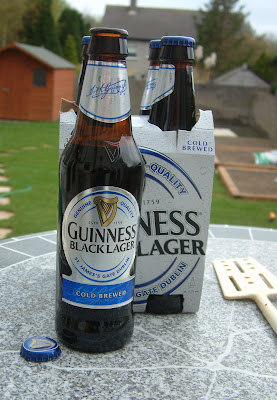 Guinness Black Lager? That is correct, a new beer from Guinness being test marketed in six of the nine northern counties in Ireland's province of Ulster, and Malaysia. In Malaysia this one will be know as Guinness Premium Beer. This move isn't all that surprising, as Guinness is but one of many brands owned by drinks giant Diageo. Diego is marketing this one as a drink straight from the bottle ice cold kind of a beer. Depending how this one sells in the test markets, we might or might not see this one show up in the United States.

Not sure what to make of this. I love Irish brewed Guinness Stout, so I would want to give this one a try. I like the fact they are making an Irish version of schwarzbier or at the very least an Irish dark lager. Irish stout is big on flavor but is low in alcohol. Not sure if the loyal stout drinker would switch up for this one. I believe Guinness is going to make this one a little less robust in flavor and bitterness, and that might attract the drinkers who don't like the big flavors of an Irish stout.
Hard to say if this will fly or not. Guinness has tried and failed in the past when they have attempted new offerings with the iconic Guinness name brand. Only time will tell with this one. For more information visit: http://www.guinness.com/ and their owners: http://www.diageo.com/
Posted by Red Rooster at 10:08 AM