America's Shrine to Beer: The Brickskeller 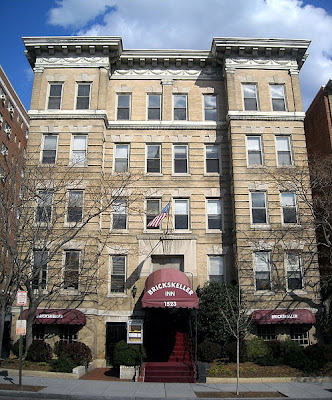 Do you love beer? If you do, and are looking for the ultimate beer bar, there really is only one place to go in the United States. The Brickskellar Dining House and Down Home Saloon located in Washington, DC, needs no introduction to those of us who are passionate about beer. Established in 1957, The Brickskellar has earned the reputation of being a true Mecca for beer lovers, and is without question, one of the world's greatest beer bars. A visit to the Brick, is a pilgrimage a true beer lover will make at least once in his or her lifetime, and only then will a beer lover see why the Brick has rightfully earned its legendary status.

When you head down the short flight of stairs that will lead you into the softly lit, catacomb like atmosphere of the Brickskellar, you will come upon the bar, and will be in awe. For behind it, you will find what appears to be a massive wall of glass. That massive wall, is actually row upon row of refrigerator units, which cold store, literally over a thousand different beers(bottles and cans) to try. The Brickskellar claims they have The World's Largest Selection of Beer and over the course of its history, the Brick has featured over 5,000 different beers on its menu. Some of those beers have been rare and special imports, or legendary American craft brews. Beers such as New Albion (America's 1st microbrewery), rare vintages of John Courage Imperial Stout from England, North American debuts of cask conditioned Scottish ales, or local favorites have all been served at the Brick.
A handful of beer bars have made the claim of having the largest beer selection of any bar in the world, but there can be only one. The Brick's only real challenge to the claim, comes from a few beer bars in Belgium. So, the Brickskellar has decided to set the record straight, and make it official. The owners of the Brickskellar have contacted The Guinness Book of World Records and submitted the 1,104(and growing) number of choices at the Brick, as evidence, that the Brickskellar's claim is true, and be officially recognized, as having the largest selection of beer of any bar in the world.
The amount of beer choices at the Brickskellar are staggering. You will find a beer menu that looks like a novella, and lists beers according to country. You will find dozen upon dozen of beer styles, from dozens of countries. Name a beer style, name a brand, and odds are are, you will find it at the Brickskellar. Pilsners, stouts, lambics, Trappist ales, porters ,dopple bocks, sassions, barleywines, Flemish red ales, hefeweizens, American India Pale Ales, rauchbiers, fruit beers, are just a few examples of the endless choices. This is paradise for a beer lover, you will find beers here, that you will not find in any other beer bar in North America. But for a beer lover, the Brick offers much more.
The Brickskellar has been host to hundreds of beer events over the years, including monthly lectures and tastings, and has featured the elite of the beer world, including The Beer Hunter himself, the late Michael Jackson. It is during special events such as this, that the upstairs party room is utilized, and rare and special draught beers, as well as bottled ones are poured. Events like this occur often at the Brick, so you will always find something rare and special pouring.
I'm fortunate. I live in the DC Metro Area, so the Brickskellar had become a semi-regular haunt of mine, though I don't get there these days as often as I would like. When I do visit it is for an obvious reason, the quality and variety of beer offered..
You don't have to be fanatical about beer to enjoy the Brickskellar, its a great place to go for lunch or dinner, in a relaxed and casual atmosphere. The menu at the Brickskellar has a variety of dishes to chose from, at some very friendly prices for DC. You will find anything from grilled burgers, salads, baby back ribs, crab cakes, to their famous Buffalo steaks. You find lots of good appetizers, such as pierogies (pasta dumplings filled with cheese and potatoes) Buffalo stew, and mussels steamed in pale ale to name a few. The Brick also offers daily specials, and the food is very reasonably priced ranging from $15-$30.
I have always found the quality of the food at the Brickstellar to be good, never too flashy, just good, stick to your ribs kind of comfort food. The service is fast and friendly for the most part, but at times can be shaky. The Brickskellar gets very busy on the weekends, so the service can be somewhat slow and under staffed during peak hours. The Brickskellar first and for most is a beer bar, so beer is the star here. Everything else is , so keep that in mind if you are expecting to be blown away by the food and atmosphere.
The Brick has that classic bar feel, and it is a great place to enjoy a few beers and hang out. My only real complaint is many of the beers that are listed on the menu will not be in stock. With so many choices, it is not that big of a deal, because you will find a beer you like, but don't be surprised to order a beer listed you are dying to try only to have the waitress tell you they are out of that beer. It is the beer that has given the Brickskellar its legendary reputation, and it is the beer that keeps beer lovers coming back for more. So if you love beer, some good comfort food, and a relaxed and casual atmosphere, you will like it here. If you are a beer lover, need I say more? For more information visit their site at: http://www.lovethebeer.com/brickskeller.html
Posted by Red Rooster at 7:10 AM