Blast From the Past: Dinner with The Beer Hunter 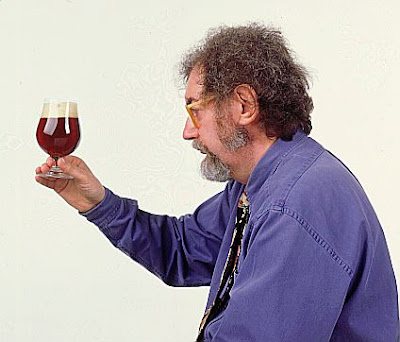 In the world of beer, there is one man who has probably done more for the promotion of beer and the respect for the craft in the past 30 years. That man is the late, great Michael Jackson, The Beer Hunter. Jackson was the world's leading authority on beer and had penned over the years dozens of books on the subject. Sadly, Jackson passed away in 2007 at the age of 65. He was a true legend, someone who comes along once in a life time. The beer world has never recovered from his loss, and he just can not and will not be replaced. The beer world will never see the likes of him again.
As a beer lover, I was very fortunate to have met Michael Jackson on a few occasions. To beer lovers and beer geeks, Jackson had celebrity status, he was the beer world's equivalent to a rock star. I would attend Jackson's annual beer tasting and lecture held at The National Geographic Society in Washington, DC. This event was always sold out, and Jackson without fail left the audience in awe.
The most memorable occasion I ever had with The Beer Hunter was the first time I ever met him. It was in 1996 at a small event held in Orange, CT at a restaurant called Jacob Marley's. This was a beer dinner which was featuring all German beers imported to the United States by a company called Beverage United. A beer dinner is usually a multiple course dinner that features beer as an ingredient in each course, and is served with a beer for each course. I have been to a number of beer dinners over the years, but this clearly was the most memorable I have ever attended. The food, the beer, and Jackson as the guest speaker and giving a tutored tasting of the beers? It does not get much better than this:
Hors d'oueveres:
Brick oven gourmet pizzas
Andouille sausage stuffed clams
Petite fillet Mignon
Beer: Schneider Weiss and Schneider Aventinus (hefeweizen, weizenbockbier)
First course:
Duck brazed in Whitebread Ale served over mescalin greens
Beer: Shlenkerla Rauchbier (smoked beer)
Second course:
Pork tenderloin with rye stuffing
Beer: Schierlinger Roggen (rye beer)
Desert course:
Chocolate cake made with Guinness Stout
Beer: Richelbrau Eisbock (ice bock beer)
Total cost? $85. Trust me, it was a steal for that price. The food was sensational, the beers phenomenal, and the star of the show, The Beer Hunter. After the dinner Jackson took questions from the audience, and basically it ended.
What made this dinner so memorable for me was the fact venue happened to be so small. My beer drinking buddy and I got there early. We went to the bar and had a beer, and Jackson appeared when we were basically the only ones there. He was setting up for the book signing, so we got to speak with him, and bought a few of his books that he autographed. That was pretty cool, and I would have been happy with that, but it got better.
After the dinner ended, only a handful of people stuck around. Some pain in the ass homebrewer and his obnoxious wife, pushed their homebrew on Jackson, and was graciously reviewed by him. After Jackson finished with that, my friend and I pulled up a chair next to Jackson and just sat and chatted with him for a while. We were still drinking beer, Jackson had moved on to scotch. Jackson was really down to earth guy, he was interested in what you had to say, and had some questions of his own about what was going on locally at the time. He was a very gracious guy, and a decent guy who had no problems staying a little longer, which was appreciated. It was a great night, and to this day is one of my fondest beer memories.
Posted by Red Rooster at 1:45 PM