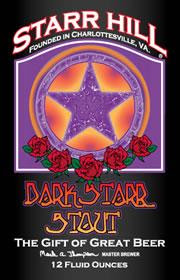 The Starr Hill Brewing Company, of Crozet, VA is a beer lover's brewery. What started as a really fantastic brewpub/brewery /music venue in Charlottesville, VA has become one of America's best microbreweries. I have been drinking their beers since they opened their doors and one of my all time favorite beers from this brewery is their Dark Starr Stout. I first tried this beer on draught at Capitol City's Mid-Atlantic Oktoberfest in 1999 and was floored by this beer. This beer won the 1999 Gold Medal in the dry stout category at the Great American Beer Festival, it is easy to see why. (its won two more gold and two bronze medals since then)
Dark Starr is a dead ringer for Guinness. This beer has to be the most stylistically accurate domestic dry stouts I have ever tasted. If there is one beer style I know, and know well, it is stout. I believe I have drank more stout in more places over the years than any other beer. I have visited St. James Gate in Dublin, Ireland, and have drank Guinness literally all over the world.
So I don't easily compare an Irish stout to Guinness, "beer for beer" probably my all time favorite brew. Dark Starr is just that, a star among stouts. Poured on nitro this black nectar cascaded down the glass, and rises to a beautiful ebony color, with a dense, creamy, tan head, and a soft carbonation. The nose on this beer is wonderful. Aromas of roasted barley, coffee, and balancing hop aromas flood the nose. The palate delivers more of as they say in Ireland "the black". A firm dark malt palate of dark malt flavors, roast, coffee, and a touch of chocolate. The body on this beer is outstanding, it is rich and full. This beer finishes with an intense roasty, bitter, long, dry finish that lingers.
Truly a great example of dry stout, a tribute to Guinness. If your a stout drinker, you will love this beer. It is rich, complex, and flavorful. This beer is the perfect foil for shell fish. Match this with raw or fried oysters. This would also work well with a boiled dinner of ham, potatoes, and cabbage, and would make an outstanding desert beer. I would pair this with hot, buttered, Irish soda bread, or a nice thick piece of chocolate cake.
For more information visit Starr Hill's website at: www.starrhill.com/
Posted by Red Rooster at 10:37 PM