There is nothing better in cold, snowy weather than a nice cold beer and a steaming hot bowl of soup. Especially so after a day of shoveling snow. Back in 2005 I visited Germany in the winter and drank plenty of beer, and had lots of hot soup. One soup that I enjoy quite a bit of was a soup called soljanka 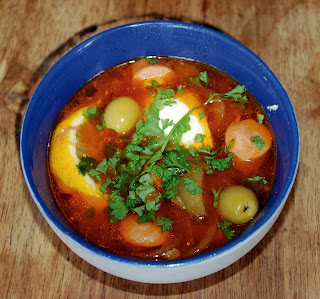 or Red Army Soup. The story goes that this soup came to the communist DDR with the Red Army, and it remained. I only saw this soup in Leipzig, Potsdam and Berlin and from what I was told, it can only be found in parts of Germany that was once part of the DDR. It is a delicious soup that is loaded with meats such as beef, salami, ham,and hot dogs believe it or not. Traditional versions use economy cuts of meats as well as organ meats such as kidney, which I decided to leave out. Soljanka is salty, zesty and tangy from the addition of olives, pickles, and lemons. I really loved this soup, and it was just awesome with a nice schwarzbier (black lager) or any good German beer for that matter. Here is my version of soljanka:

In a Dutch oven or stock pot, let beef broth, beer, and crushed tomatoes come to a boil, and then turn down to low heat to simmer. While broth is heating, sauté onions, mushrooms, and strips of sliced beef in butter in a sauté pan. When finished sautéing, add onion, mushroom, beef mixture to simmering broth with diced carrots, pickles, olives, capers, salami (or Lebanon baloney), ham, franks, and lemon. Let simmer for 1 ½ to 2 hours. Stir occasionally; skim off any fat that collects at top of pot. You could also do this in a slow cooker/crock pot on low and let simmer for a few hours. Garnish with sour cream , chopped dill, and lemon zest.

Serve with a hearty rye or pumpernickel bread, and of course, a good German beer.
Posted by Red Rooster at 3:51 PM