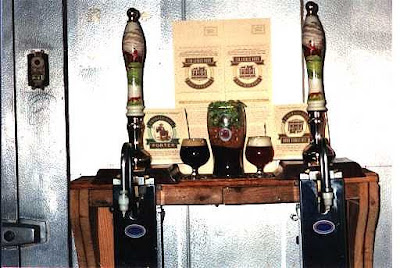 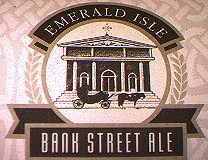 They say fame is fleeting, and only the good die young. I can not think of a better example of those statements being true when speaking of the late, great, Emerald Isle Brew Works of West Warwick, RI.
For those of us who were privileged enough to sample Emerald Isle beers, we were very fortunate souls. Emerald Isle was a brewery ahead of its time. It was a specialty brewery in a speciality beer market. In the United States, when Emerald Isle was established in early 1990's you could not even call what Emerald Isle was doing as ground breaking at the time, it was truly revolutionary.

Established in 1994 by Raymond McConnell, a dentist by trade, Emerald Isle was a true labor of love. Ray's brewery was a small one. It only produced about 200 bbl of beer a year. You had to go to a bar to get it. Not only did you have to go to a bar, but you had to go to a bar that had a specialized system put in the bar to deliver the beer Ray was brewing. Emerald Isle was so small it could not even be called a microbrewery. I'm not sure if it was because of Ray and Emerald Isle, but a new term was coined in beer geek circles: pico brewery.
So what made Emerald Isle ahead of its time, and so revolutionary in 1994? Quite simple. At that time in the United States, there was no brewery big or small that specialized in brewing cask conditioned or real ale. I do not believe to this day there is any brewery in the U.S. that was dedicated to the production of 100% cask conditioned ale. There probably never will be again. In 1980 the pioneering William S. Newman Brewing Company of Albany, NY was brewing English ales, but was not cask conditioning them, and serving them via beer engine. Emerald Isle was a true legend in the world of American craft brewery. History will prove how legendary.
What is cask conditioned or real ale? :
Cask ale or cask-conditioned beer is the term for unfiltered and unpasteurised beer which is conditioned (including secondary fermentation) and served from a cask without additional nitrogen or carbon dioxide pressure.

Emerald Isle brewed cask conditioned ale. Emerald Isle beer were dispensed by use of a beer engine or hand pump, that the brewery had custom made for them in Derbyshire, England, UK. A beer engine is a is used to siphon the beer from the cellar of a pub or bar. Because most bars who even purchased the beer engines to serve Emerald Isle beers did not have the proper means to cellar the beer, EI took steps to condition the beer at the brewery, and make it "beer engine ready."
The beer engine, as pictured, is a system used to dispense cask or real ale. It is a 0.5 imp pt (0.28 l), sometimes 0.25 imp pt (0.14 l), airtight piston chamber; pulling down on the handle raises the piston which drags up a half pint of beer. When a cask is first tapped into the beer engine, or after the lines have been washed through, the pump needs to be pulled several times to clear the lines of air or water. The line will continue to hold beer, which will tend to go stale overnight, so the first beer pulled through will be bad beer, and this will be simply thrown away. Most pubs will pull through at least a pint of beer on each beer engine before they open, while others will wait for the first order of beer on that pump before pulling through. Experienced bar staff will serve a pint with two long, smooth, slow pulls of the pump handle, plus a short third just to make sure the glass is full.
Emerald Isle's flagship brew was a beer called Bank Street Ale. This beer was a classic example of bitter, with wonderful flowery hop aromas, great pale and biscuity malt flavors, estery fruity flavors, on a soft and drinkable body. Pints of this beer was pulled by beer engine at select locations in Rhode Island, where this beer was sold, and each pint was an experience. Cask ale is a living, breathing thing, one pint is a singular experience. Cask ale is different from pint to pint, as the cask matures. It is a wonderful thing.
I can not tell you the countless pints of this beer I drained back in the 1990's. I had two regular places in RI where I would go because I knew they had a beer engine installed and served Emerald Isle products. One place, crazy enough was a rib house, that is a legend in its own right in RI, but that is another story. This was the type of beer you could sit with and enjoy and slowly work at the bar. This was the type of beer you could drink 15 or more in a rowdy session. This is a beer that when you drank it each and everytime, you said to yourself, "wow this beer tastes really good." It might not have tasted the same from the last time you tried it, but it was a kind of beer you were always looking to try again, and looked forward to trying again. A big part of that appeal was the fact you knew you could only get in pulled from the beer engine at a few places. This beer was special.

Emerald Isle went on to produce more classic British beer styles such as a Porter, an India Pale Ale they called Beaver Tail, and even a Holiday Ale brewed with spice, but it was Bank Street Ale that made this brewery a legend. Brewpubs were getting popular, microbreweries were taking off as well, but what Emerald Isle was doing was simply amazing for the time. I look back now, and am still amazed that Emerald Isle ever made it on the market. Think about it. Not only did you have to convince a bar to carry your beer, but you also had to convince them to invest in a beer engine, and your beer had to be served a certain way? The takers were few, but those who did buy into it? Bank Street was usually one of their most popular beers, and for good reason, this beer was so, so, fresh, flavorful and drinkable.

Sadly real ale is expensive to produce, and the beer engine system to serve Emerald Isle beer expensive to deliver and install. While the brewery never lost money, it never made money either, and in 1998 Ray and his son Mike who was Emerald Isle brewer, decided to close their doors, and end a very short, yet very important chapter in American brewing history.
I will always remember Emerald Isle, its founders Ray and Mike McConnell with the utmost respect and fondness. Being a native Rhode Islander, I also will always take pride in the fact that such an undertaking happened in Rhode Island. I was lucky enough to get to meet Ray a few times, and actually hang out at the brewery and go drinking with Mike. I tried all their beers, but sadly never got a crack at Beaver Tail. I'll always remember Bank Street Ale. Anyone who ever tried that beer? They will always remember as well. Beer that good you will never forget.
Posted by Red Rooster at 6:08 PM