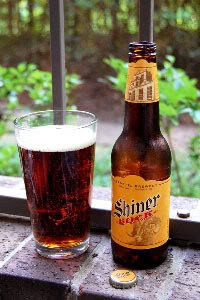 The Spoetzl Brewery of Shiner, TX has been giving the people of Texas beers with some regional flavor and a little different from the average main stream lager. This long standing Texas regional brewery, was founded in 1909 by German and Czech immigrants, and continues to be one of America's most successful regional brewers. Shiner's most popular product is their legendary Shiner Bock. This beer has enjoyed a cult following in Texas, and the Southwest for decades. Shiner Bock is based on a traditional German bock beer recipe, but over the decades, it has evolved into its own unique style of bock beer, exclusive to Texas. Because of this, Shiner has been recognized in the beer world as Texas Bock.

Shiner is the bench mark example of this unique Texan style, as it was the first brewery to do this style of bock. Over the years, Shiner has expanded its distribution, and can now be found in about 23 states. Many beer lovers are new to Shiner Bock, they know the legend, and now they can taste the beer. Texas Bock is brewed with corn grits as an adjunct, something you will not find in traditional bock beer. Texas bock is also lighter in sweet malt flavor, lighter in body, and alcohol, than traditional German bock beers. So what you have is a slightly sweet, very smooth, drinkable,tasty, dark lager that is a perfect thirst quencher in scorching Texas heat, and a perfect beer to match with Texas BBQ.


They say imitation is the most sincere form of flattery, and other Texas breweries such as Lone Star, and Pearl have brewed up their own versions of Texas bock, styled after Shiner Bock. Anheuser-Busch InBev, the world's largest brewer, even brewed up, marketed and distributed, a Texas Bock called Ziegenbock, to compete with Shiner in Texas and the Southwest. If you have never had a Texas bock, Shiner the original, is the place to start. This is a very clean, smooth, dark lager, with just enough flavor to please even a craft beer lover like me.

Shiner Bock pours to a light brown/amber color with a soapy white head that fades, and a lively carbonation. Aromas of slight sweet malt, and sweet corn bread aroma flood the nose. The palate on this beer is lean, but with some nice sweet malty, and sweet corn flavors on the tongue. The corn grits flavor in this beer is pleasing, and is what makes Texas bock quite unique. The body is very smooth and round, making it very drinkable. Shiner Bock finishes with more of subtle sweet malt and corn flavors, and just enough hop balance so this beer is not cloyingly sweet, and a fizzy sting of carbonation.


Many beer geeks don't get too excited about Shiner Bock, or Texas bock beers in general. They find it to be bland, and over rated. If you are expecting a tradition German bock beer, don't. Shiner isn't that, nor is it trying to be. As stated, this beer over the decades has evolved into a style on to itself; Texas bock. I happen to like the fact that a beer like this existed in a time when micros were no where to be found, and believe Shiner deserves a little respect for that fact alone. This is a very drinkable beer that makes for a great drinking beer in hot weather, and a great beer to match with a smoked Texas brisket. I've been drinking Shiner Bock for quite a few years now, and I will drink it on draught and in bottles from time to time, especially in the summer months. If Shiner Bock is in your area, seek it out, and give Texas bock a try. For more information visit the brewery at: http://www.shiner.com/
Posted by Red Rooster at 9:44 AM