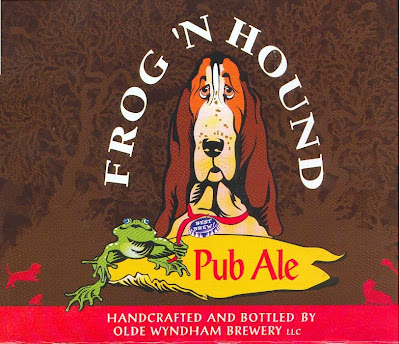 Looking at this label reminds me what a great thing local beer is. Sadly, not everyone gets it, and a brewery producing a quality product will ultimately fail without support at its grass roots. Sadly this was the case with the Olde Wyndham Brewery of Willimantic, CT.

Established in 1997, Olde Wyndham was a small microbrewey that was located in an old mill complex on Main Street in downtown Willimantic. This brewery had such promise, and initially they looked to have a bright and promising future. They produced two flagship beers, Frog 'N Hound Pub Ale and Frog 'N Hound Cream Ale. These two beers were staples for me. I would always have either the Pub Ale or the Cream Ale in my refrigerator. I would buy cases upon cases of these beers, and would always order them on draught at my favorite brewpub The Willimantic Brewing Company and Main Street Cafe.

The Pub Ale was a Scottish ale by style, which was a deep brown, hearty, yet very drinkable malt accented beer with lots of good toffee flavors balanced with mild hop bitterness. It was the type of beer you could drain pint after pint of, went well with all types of food, and was just an all around great beer. The Cream Ale, was an American Cream Ale by style. Pale golden in color, with crisp pale malt flavors, a touch of sourness, this beer was thirst quenching and delicious, with a snappy hop bite that had you wanting more. I toured the brewery only once, and remember the owner and brewer giving me and my friend a sample of the Cream Ale right off the bright tank where it was still conditioning.

Olde Wyndham also contract brewed some beers for other breweries, most notably the legendary Grim Reaper Barleywine. They were doing seasonals as well. I remember drinking their Pumpkin Ale and India Pale Ale on draught and being very impressed. They were present at beer festivals as well. Looking back, I am glad I purchased a pint glass with the Frog 'N Hound logo on it. Little did I know that this brewery would be out of business but a few years later.

Sadly in 2000, Olde Wyndham closed its doors. I believe the biggest problem they had was their beers were just not visible enough in a market flooded with craft breweries. Their beers were awesome, but they some how got lost on the shelf. I don't believe they had enough draught accounts in enough bars in enough cities in CT to make the brewery profitable. Had the brand been marketed better and was more visable? Who knows, we could still be drinking Frog 'N Hound beers today. A sad ending to a great brewery that brewed outstanding beer. I'll always remember Olde Wyndham and Frog 'N Hound beers with great fondness.
Posted by Red Rooster at 8:41 AM