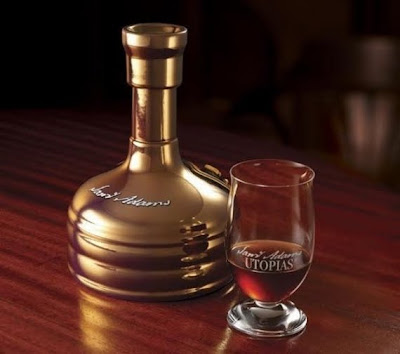 Extreme beer has been a pretty big trend in the craft beer world for the past 10 years or so. There have been innovative brewers who have been brewing extreme versions of beer styles for years, but it seems now a days, just about every craft brewery has something, big, bold, and unusual to offer. Beer geeks go crazy for these types of beer, to them it is like porn. Be it extreme hops, extreme alcohol, extreme malt, or extreme sour, these beers are for a very select market. I for one love these types of extreme beers, and some examples are truly remarkable.

Samuel Adams Utopias MMII is one such beer. This is a beer so special, only 3,000 to 4,500 bottles of this beer when it is produced every few years, is released to the public for world wide consumption. The Boston Beer Company, of Boston, MA at one time held the world record with this beer, and it was rightfully called The Strongest Beer in the World. This amazing, complex beer comes in at a titanic 24% alcohol by volume, or 48 proof. Utopias MMII is brewed with three different malts including 2 Row Harrington, Caramel, and Vienna. It is then hopped with Noble hops varieties, including Hallertau Mittelfrueh, Tettnag, Spalt, and Czech Saaz. Utopias MMII is then fermented with champagne yeast strains, which are very virulent, and resilient tohigh alcohols that would kill normal brewers yeast. It is then aged in port wine, scotch, and cognac barrels, picking up amazing aroma and flavor compounds.

After aging, Utopias MMII is then bottled in beautiful, polished, copper finished, 24 oz bottles, shaped like a brew kettle. This beer is brewed to be an after dinner drink. Decant a 2 oz serving in a brandy snifter or cordial glass, and serve at room temperature.(70 degrees).

Sam Adams Utopias MMII pours to a brilliant, deep golden amber/rust color with no head, and no carbonation. It is a perfectly still liquid. The nose of this beer is amazingly complex and aromatic with just layers of aromas. Cinnamon, oak, vanilla, walnut, black pepper, sweet malt, sherry, maple, and peppery alcohol heat flood the nostrils. The palate is rich and slightly syrupy on the tongue, with layers off flavors. Complex notes of oak, sherry, whiskey, sweet malt, vanilla, maple, and walnut flavors fill the mouth. Utopias MMII finishes with more of those complex flavors, and ends with a very warming, soothing, high octane burn.

This is an amazing beer drinking experience, akin to drinking a fine single malt scotch or cognac. This is the ultimate sipping brew, the perfect beer to have after a big meal, and the perfect beer to slowly sip and savor on a special occasion. I was very impressed with this beer, and over the years have slowly worked on my bottle, partaking only on special occasions. For with a beer this special, comes a lofty price tag. It retails for $100+ a bottle, and can only be found in select markets, in only a handful of states. I can actually live with that price, as Sam Adams Millennium Ale (the precursor to this beer) went for over $200 a bottle years ago.

I have been drinking Sam Adams since 1987 and have been a loyal fan since my first Boston Lager those many moons ago. That being said I would only recommend this beer to true beer lovers. It is overpriced in my opinion, if you match it up to equal quality scotchs, ports, or cognacs. But that is what makes Utopias MMII so special for beer lovers. This is a beer, it was brewed, not distilled, and is unlike any beer out there. So I say, a beer this special is worth it, but it probably would not be worth it to the casual beer drinker. This beer indeed has a target audience; craft beer lovers and beer geeks. I'm happy to say I own bottle number 3952 of the 2003 vintage. For more information visit the brewery's site at: http://www.samadams.com/
Posted by Red Rooster at 7:31 AM