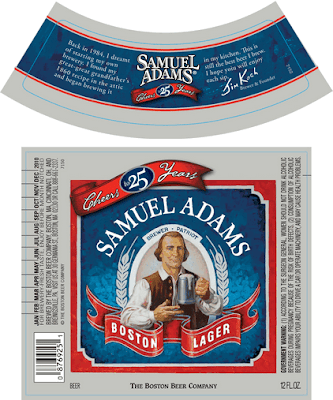 Has it really been 25 years since The Boston Beer Company of Boston, MA started brewing? Amazing when you think about it, and how far craft beer in the United States has come.
These days Samuel Adams Boston Lager can be found just about anywhere. This beer can be found not only in all 50 states but literally all over the world. The Boston Beer Company has done so much for the craft beer movement, bringing craft brew into the mainstream, and did so with their flagship brew, SABL.

I have such great local choices when it comes to beer, but it is nice to know, where ever I go, odds are I will at the very least, find SABL. And make no mistake, with some many choices beer lovers become jaded and can overlook this beer. It should not be in my opinion, this is a great beer. It is a world class beer in my opinion. SABL is loosely based on a pilsner, but deeper in color, and a bit more robust in flavor.


SABL pours to a deep copper color with a nice white head, and a moderate carbonation. The nose is very nice, grassy hop aromas and aroma of malt sweetness flood the nose. The palate is firm, with good pale and caramel malt flavor and a round and clean body. This beer finishes with a vibrant grassy hop bite that lingers and lets you know you just had a well crafted beer.
SABL is a great beer that is very accessible, and very drinkable. I often call this beer Old Faithful because I know it is the one craft beer I will find in places where craft beer choices are few and far between. SABL is one of the beers that put craft beer on the map, and it is well worth revisiting no matter how many times you have had it in the past.

I picked up a six pack of SABL with the "old school" label celebrating 25 years of great craft beer. It is as delicious and flavorful as the first SABL I remember drinking back in 1987. Here is to 25 more years. Cheers!
Posted by Red Rooster at 1:53 PM