Beer Sommelier or Beer Douche?: A self proclaimed expert 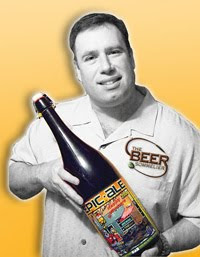 Can you believe this guy? I have met a lot of beer geeks in my day who are full of themselves, but this guy just might take the cake. He calls himself The Beer Sommelier and is not shy about telling you what an "expert" he is on beer, complete with a long list of self important "beer credentials." He has even turned this into a business believe it or not, and you better believe this guy is serious. His website? What else could it be called?

Feel free to click on his resume for a good laugh. Quite frankly, it is hysterical. He has garnered himself some press, and actually got media types fishing for a story who googled "beer expert" to buy enough into it to put him on television. "Every continent in the United States" is priceless.

What is a sommelier? It is a title, it is earned, and it has nothing to do with beer:

Sommelier: A wine steward, is a trained and knowledgeable wine professional, commonly working in fine restaurants, who specializes in all facets of wine service. The role is more specialised and informed than that of a wine waiter. Their principal work is in the area of wine procurement, storage, and wine cellar rotation. They are also responsible for the development of wine lists and are responsible overall for the delivery of wine service and training for the other restaurant staff.

Working along with the culinary team, they pair and suggest wines that will best complement each particular food menu item. It could be argued that the role of a sommelier in fine dining today is strategically on par with that of the executive chef or chef de cuisine. A professional sommelier also works on the floor of the restaurant and is in direct contact with restaurant patrons. The sommelier has a responsibility to work within the taste preference and budget parameters of the patron.

The International Sommelier Guild is the only Board of Education licensed provider of sommelier training and certification in North America. The ISG delivers courses in more than 20 US states’ 6 Canadian provinces and 2 Australian provinces. The Court of Master Sommeliers certifies professional sommeliers and only a tiny fraction of the finest professional sommeliers achieve the title of Master Sommelier, a title similar to Master of Wine.

Somelliers are wine stewards, trained and certified. The title somellier is so synonymous with wine, and the wine industry. I think to put "beer" or anything else in front of somellier, is insulting to a real somellier. It cheapens the title in my opinion. What’s next, cheese somellier? If you told a real somellier you were a "beer" somellier", they might have a hard time keeping a straight face.

So what does a beer expert do? Believe it or not there is actually a program out there for the beer expert. It is the beer world's answer to a sommelier, the title is called cicerone.

The word Cicerone is used to designate those with expertise in selecting, acquiring and serving today’s wide range of beers, similar to what a sommelier is in the wine world.

And yes, there is an actual program out there:

I am in favor of the Cicerone Certification Program. Being certified from an independent body, that appears to be doing this certification to better serve the food/beverage business, and give beer in the beverage world the proper treatment it deserves, would be more credible than a silly, self proclaimed title. The "beer sommelier" does not think so:

"I probably would have even considered taking their program if my timing were different, but having built up as much credible background as I have, to date, there’s no need any more. I even went as far as to attempt to create a "Beer Sommelier Certification Board," but couldn't get more than 1-2 qualitative board members to commit to its setup and management.

"My broad range of experience and skills surpasses that of any one industry professional position: writing, brewing, beer judging, teaching, beer dinner/tasting hosting, etc. How many professional brewers practice all these skills and keep them current? A handful. How many writers are award winning brewers as well? A handful. So again, what is the "proper" combination of skills and experience to hold said position?"

If you say so, it has to be true? Right?

I’m have a hard time with someone who states they have all these self proclaimed " beer credentials". Though I, and probably a thousands or so or more, may not have decided to turn our love, passion, and knowledge for beer into a business, it does not make it any less real or valuable. Any beer geek is a beer expert on one level or another. I really don’t think there is anything a "beer sommelier" could teach me. I keep current with what is going on in the beer world because it is a love and a passion for me. I drank my first porter in 1977. I have been drinking "craft" beer since the early 1980’s. I could go on, but I find it pointless, because 30 years of drinking beer, experiencing the culture from the start of the craft beer movement, working in the industry, traveling the globe just for beer, etc, make me any more of a beer expert than thousands of people who share the passion?

I continue to learn, I learn something new every day. What does "qualify" one as an expert? I would have to say the Cicerone Certification Program is a step in the right direction. Not some buffoon with a business card, self proclaimed title and a phony resume.