Pure Beer: The Reinheitsgebot or German Beer Purity Law of 1516 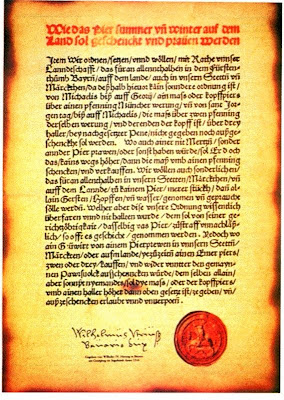 What is pure beer? To the Germans it means one thing, and one thing only. Beer brewed with malt, hops, water, and nothing else. When the kingdom of Bavaria joined the German Empire one stipulation the Bavarians insisted upon was the implementation of the Reinheitsgebot or Beer Purity Law of 1516. It was to be enforced not only in Bavaria but the whole of Germany. The Reinheitsgebot was an regulation put in place for German brewers and was really one of the very first consumer protection laws ever enacted.


German brewers no longer have to abide by the strict standards of the Reinheitsgebot. It was replaced in 1993 by the Vorläufiges Deutsches Biergesetz or Provisional German Beer Law which allows adjunct such as wheat malt and cane sugar in the brewing of beer that the Reinheitsgebot forbade. It is interesting to note that yeast is not mentioned for the simple fact yeast was not understood at the time. Also, malted wheat, was only allowed to be used by royal brewers and was actually forbidden by the Reinheitsgebot.

Many German brewers to this day still pay strict adherence to the Reinheitsgebot. Many other breweries world wide have followed suit brewing a product the Germans like to call solid and clean. Here is an English translation:

"We hereby proclaim and decree, by Authority of our Province, that henceforth in the Duchy of Bavaria, in the country as well as in the cities and marketplaces, the following rules apply to the sale of beer:

"From Michaelmas to Georgi, the price for one Mass [Bavarian Liter 1,069] or one Kopf [bowl-shaped container for fluids, not quite one Mass], is not to exceed one Pfennig Munich value, and

"From Georgi to Michaelmas, the Mass shall not be sold for more than two Pfennig of the same value, the Kopf not more than three Heller [Heller usually one-half Pfennig].


"If this not be adhered to, the punishment stated below shall be administered.


"Should any person brew, or otherwise have, other beer than March beer, it is not to be sold any higher than one Pfennig per Maass.

"Furthermore, we wish to emphasize that in future in all cities, markets and in the country, the only ingredients used for the brewing of beer must be Barley, Hops and Water. Whosoever knowingly disregards or transgresses upon this ordinance, shall be punished by the Court authorities' confiscating such barrels of beer, without fail.

"Should, however, an innkeeper in the country, city or markets buy two or three pails of beer (containing 60 Maass) and sell it again to the common peasantry, he alone shall be permitted to charge one Heller more for the Mass of the Kopf, than mentioned above. Furthermore, should there arise a scarcity and subsequent price increase of the barley (also considering that the times of harvest differ, due to location), WE, the Bavarian Duchy, shall have the right to order curtailments for the good of all concerned."