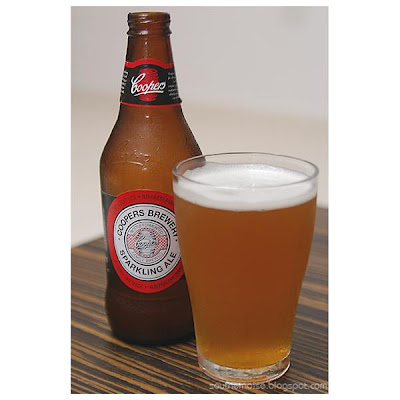 When people think of Australian beer, one name comes to mind: Fosters. That is understandable, as Fosters at one point in time was Australia's most popular export beer, and it enjoys worldwide distribution. But did you know that the Fosters we drink here in America, does not come from Australia? It is actually brewed in Canada for the North American market, and really isn't a remarkable beer. There is another Australian beer however, that is actually exported from Australia, its brewed in Australia, and is a world class beer from Australia.

That beer is Coopers Sparkling Ale brewed in the South Australian city of Adelaide. The Coopers Brewery is the sole remaining family owned brewery in Australia, and has been in the Cooper family since it was founded by English immigrant Thomas Cooper in 1862.

The brewery does a number of beer styles, and have been doing bottled conditioned ales and stout since those early colony days. That is amazing in an Australian beer market, that has been washed away in bland lager for decades. The fact that Coopers has survived so long is a testament to what a great brewery it really is.

The Sparkling Ale is a world class beer, that is bottle conditioned and brewed with the same ale yeast strain the brewery has been using for the past 90 years. "Cloudy but fine" is how they market this beer, and fine is very much an understatement.

Coopers Sparkling Ale pours to a very cloudy, opaque, pale blond color, with a dense white head, and a very vibrant and lively carbonation. Like with a good German hefeweizen, you want to roust the yeast and pour it in this beer. The nose on this beer is very inviting with zesty, lemony, sherbet like hops aromas, paired with fresh bready and yeasty aromas. The palate is firm with lots of crisp, tart, malt flavors, and flavors of fresh bread, that dance with some estery fruit on the tongue. Coopers Sparkling Ale finishes with more crisp and tart flavors up front, then ends with some nice grapefruit/lemony hop bitterness, that buzz on the tongue with a sting of carbonation.

This is such a refreshing and delicious beer. I love this beer, and this very unique Australia beer style. Coopers Sparkling Ale is a beer that should not be over looked, and one that all serious beer lovers should try. This beer works exceptionally well with grilled fish such as sword fish, salmon or tuna steaks. Coopers beers are widely available in a number of markets, and all their products are well worth seeking out. This is real Australian for beer. For more information visit their website at: http://www.coopers.com.au/
Posted by Red Rooster at 7:11 PM