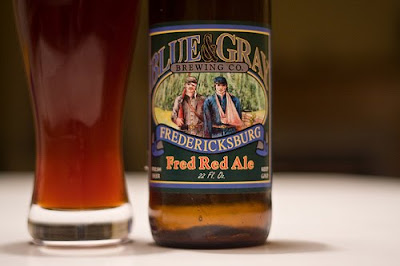 I have said it before, and I will say it again, life is good for a beer lover, if you live in the United States these days. Over the past 25 years or so, I have seen the brewing of craft beer go from its infancy stages, through its growing pains, and now into its young adult life. What has happened in these past few decades is the re-birth of what brewing was like in the United States, before Prohibition. Local beer was a very real thing then, which each state, and in many cases, each town or city having it own local brewery, brewing its own local beers.

I am happy to say that this dedication to the crafting of local beer is alive and well in the Commonwealth of Virginia. A perfect example of this is the Blue & Gray Brewing Company, of Fredericksburg, VA. Blue & Gray Brewing started its life as a contract brewery, but in 2002 it found a home in Fredericksburg, VA and started brewing its own beers.This is a very small, very local brewery, which does not distribute very far outside of the Fredericksburg area. This is local, grass roots brewing at its very best.

Blue & Gray over the past few years has built a small,but very strong local following. In fact, half of all the restaurants and bars in Old Town Fredericksburg will have at least one Blue & Gray beer on tap, and that is a very good thing indeed. Blue & Gray brews four regular beers as well as a number of seasonal offerings. Blue & Gray isn't my local beer per say, but I am fortunate enough to be in striking distance, and I usually make the 40 mile trek once a month or so to fill my growlers with their beer, and enjoy a pint or two at one of the many charming establishments in Old Town Fredericksburg.

Perhaps my favorite Blue & Gray beer is their Fred Red Ale. It is an Irish Red Ale by style, and it just might be the most impressive domestic example of the style I have ever tasted. This beer is absolutely delicious and drinkable, and is just bursting with flavor and character. And some of the flavor is very local flavor. Blue & Gray has its own hop farm, and locally grown Virginia hops are added to the brew along with imported European hops, and domestic malts. This beer is a classic example of Irish Red Ale, with a soft sweet malt back bone, lots of juicy, fruity estery aromas and flavors, and just the right amount of hop bitterness to balance this beer out to perfection.

Fred Red Ale pours to a beautiful, bright, deep rubyred color, with a nice white head that fades and a soft to moderate amount of carbonation. The nose onthis beer is very inviting with lots of sweet caramel malt aroma paired with estery fruit aromas, and hintsof herbal/grassy hops. The palate on this beer is soft and fat on the tongue with lots of good sweet,caramel, and biscuit malt flavors paired with nice fruity flavors, and soft buttery undertones. Fred Redfinishes with more sweet malt and fruit flavors upfront, and then ends with just enough hop bitterness to cut the sweetness of this beer.

This is a fantastic beer, which is just so flavorful, luscious, and so drinkable. Michael Jackson, The BeerHunter, liked to use the term "moreish" when referring to a beer you just want to have more than one of. Fred Red Ale is that type of beer. To use a food analogy drinking this beer is like biting in to a cold, soft, fresh peach, which is just bursting with sweet and tangy flavors. It makes for an excellent session beer to enjoy in one of a number of bars in Fredericksburg.

Fred Red Ale is a very food friendly beer, and would work well with a number of dishes, from traditional pub grub, to a nice juicy steak. Kegs, 2 liter, 1liter, 22 oz, and 12 oz bottles of this beer and all Blue & Gray beers can be purchased directly at the brewery. I made the very wise investment of buying six1 liter swing top bottles. It was expensive initially at $9 a bottle, but now that I own the glass, refills are only $3 !! I fill all six each time I go the Blue &Gray, and walk away with 6 liters of some of the freshest, most delicious, local beer for a usually less than $20

A trip to this brewery is a must for any beer lover in the Northern Virginia area, and for those visiting, I would suggest trying this beer on draught, or buying the 22 oz bombers or 12 oz six packs. Formore information about this beer, and the brewery, visit their site on the web at: http://www.blueandgraybrewingco.com/
Posted by Red Rooster at 1:32 PM