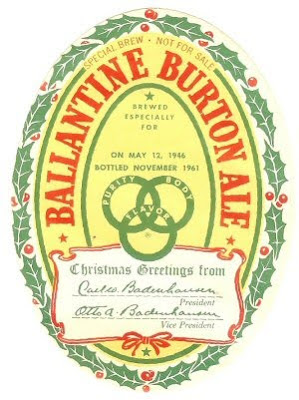 If ever there was a beer in American brewing history that could be called a holy grail, Ballantine Burton Ale most certainly is it. This beer over the decades has gained an almost mythical status, and is a true icon in American brewing history. For those who know about this beer, the honor of drinking a sample of the legendary Ballantine Burton Ale is something they are willing to pay a heavy price for, and will give them serious bragging rights among beer geeks. Some bottles manage to go under the radar, and can be purchased for as little as $10 or $15 dollars. But more often than not, a bidding war will ensue, and the prices beer geeks are willing to pay for a bottle of Burton Ale, can go sky high. I once saw a 7 oz bottle of this beer go for over $100 on EBay, and there are beer geeks out there, that have been willing to pay up to $500 or more, just to get a sample of this legendary brew.

So, you must be asking by now, what on earth makes Ballantine Burton Ale so special? A lot really, and in lies a tale... Ballantine Burton Ale was brewed by P. Ballantine & Sons of Newark, NJ. Ballantine of course, is a familiar name to many America beer drinkers, the brand name Ballantine still exists to this day, but only as a label. The brewery in Newark has long since closed, when it was purchased by Fallstaff in the mid 1960’s, and the Narragansett Brewing Company of Cranston, RI took over brewing Ballantine beers in 1967. One beer however, was never brewed or bottled again after the brewery closed, and that beer was Burton Ale.

Ballantine brewed some ales of distinction over its rich history, including another legendary American beer, Ballantine India Pale Ale, which up into the Mid 80’s was still a flavorful beer, and one American beer lovers held in high regard. But the most special beer Ballantine ever brewed was Burton Ale, and it without question, has become the holy grail of American beers. See, Burton Ale, was NOT FOR SALE. The brewery only released this beer as special Christmas gifts to employees, associates, and friends of the brewery. Each bottle was labeled as a Special Brew: Not For Sale Brewed especially for: with that person’s name appearing on the label festooned with Christmas holly and wreaths and the words: Seasons Greetings from all of us at Ballantine.

How did this beer come about? There are many stories, but the most credible accounts come from former Ballantine employees who worked at the brewery when the Burton Ale as being produced. One account from a former brewery lab worker states that Burton Ale was brewed to be used for what was called, “Stock Ale”. At one time breweries such as Ballantine provided bars and taverns with a small barrel (about a gallon) known as a pin with a spigot that would sit on top of the bar. It contained a heavy, flat, ale that could be added (for a small fee) to a glass of draught beer as a flavor enhancer. The story goes a brewmaster from a Burton on Trent brewery in the UK was brought to Newark, NJ by Ballantine to brew up this stock ale according to an English recipe and brewing methods. The market for stock ale did not materialize, and the ale was put up in small storage or aging tanks in the brewery.

Ballantine Burton Ale was brewed in limited batches from the 1920’s-1950’s once a year on May 12th, and was then aged in huge oak tanks at the brewery. Vintages of Burton Ale could spend anywhere from 7 to 20 years in oak, before being bottled, and then given away by the brewery as gifts. A former Ballantine lab worker stated as fact:

"The bottling of the ale was a very carefully controlled operation. Samples would be taken from the aging tanks and evaluated. Sometimes all the ale for the run would come from one tank or several tanks would be blended together to obtain the proper flavor and mouth feel for this product. The tanks holding the ale were sealed by locking the zwickles (sampling faucet). Each tank had its own lock on both middle and bottom zwickels and the hose valve connection on the very bottom had a special screw cap which was also locked. A set of keys for the tanks was kept in the laboratory and the brewery supervisor’s office. When the ale was bottled there were supervisory personnel at any point where product might be “lost.” The same held true for the bottles and all the production was strictly accounted for and kept under lock an key in security areas before shipping. A few cases were also locked away for reference the next years run.

The storage tanks were laboratory tested every 6 months for lactic acid and gravity. At Ballantine the gravity was measured by degrees Balling using hydrometers. The test determined if a secondary fermentation was occurring in the tank, a sure sign of wild yeast doing its dirty work. The lactic acid test was to see if bacteria were infecting the tank and they would produce lactic acid as a by-product. The brew master and technical director would also evaluate each tank for appearance, flavor and aroma.
It can now be told that when the brewers would set up a holiday buffet out in the brewery the price of admission for their laboratory friends was very often a quart sample jar of Burton Ale “zwickled’ from one of the tanks."

Ballantine Burton Ale if indeed a stock ale, was brewed to be a high gravity, high alcohol beer, coming in at about 10-11% abv. Ballantine, who produced its own hop oils, used lavish amounts in this beer as well, to preserve it, and the high hopping, put Burton Ale at 60+ IBU (bitterness units). Ballantine Burton Ale by style today could be called a highly hopped barley wine, but stock ale also known as October beer seems to make more sense, as these beers were brewed in the UK and early American brewing for centuries. Especially so, if one takes the brewery employee's account that a Burton on Trent brewer came over from the UK to formulate stock ale for the brewery in Newark, NJ.

The last time a vintage of this beer was bottled at the brewery in Newark, NJ, was in 1966. The number of vintages that are still in existence is unknown, but there is no doubt that this beer is very rare and hard to find. I was fortunate enough to win an on line auction a few years back, and was able to acquire three bottles of Ballantine Burton Ale. All three vintages were brewed especially for Hans Hinrichs on May 12, 1946 and bottled in November of 1964(one bottle) and 1965(two bottles). So my vintages of Burton Ale were brewed 64 years ago, and bottled 45 and 46 years ago.

The world now has a few less example of Ballantine Burton Ale. A few years back I drank two examples of Burton Ale, and re-sold one to a brewer master of all people. The first example I drank was actually a pretty remarkable beer. I posted up a review of it on a beer website a few years ago, and these were my impressions:

Ballantine Burton Ale pours to a beautiful, bright, ruby red color with no head and no carbonation. I was amazed how bright this beer poured. When mailed to me they were quite hazy, but I cold stored them, the yeast settled to the bottom of the bottle and poured bright. I was also very careful when I poured to make sure the yeast sediment stayed in the bottle. The nose on this beer shocked me. I was expecting lots of oxidation, but I did not get that. Very pronounced aromas of oak, sherry, and alcohol flooded the nose. This beer matured in oak for 20 years, and is one of the reasons this beer has held up so well. The palate was full on the tongue, with flavors of oak, and a surprising amount of estery fruit flavors of plum and apple, paired with a nice back drop of caramel maltiness. Ballantine Burton Ale finished with more oaky and fruity flavors up front, and ended with a peppery, soothing, warming burn that lit a fire in the belly.


I’m stunned. I was not expecting this beer to be in such good condition after all these years. I tasted an example of Burton Ale back in 1999, brewed in 1934 and bottled in 1941, and it was undrinkable. It amazed me, and my wife as well, who out of curiosity, had to take a taste, what high condition this 56 year old beer was in. It tasted as Jackson stated, an aromatic vintage barley wine. I believe the 20 years in oak really helped, as oak aromas and flavors were ever present in this beer. The bottles I purchased were kept in very good condition. The labels were not even worn, so I suspect, who ever had these bottles before me, stored them in a cellar, in a cool, dry place. Hans Hinrichs, were ever you are, I toast you. Thank you for not drinking some of your vintages of Burton Ale, and giving this beer lover, 37 years later, a chance to taste this unique beer.

Ballantine Burton Ale is truly the holy grail of American beers, and it was an honor to drink a piece of American brewing history. And you can too. Check EBay, and other on line auctions, and you might just be able to find a bottle of this legendary beer.
Posted by Red Rooster at 8:30 AM