Hi Neighbor! Have a Gansett! 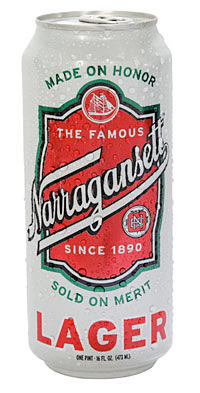 A slogan made famous by the Narragansett Brewing Company of Cranston, RI. Narragansett had been a brewery in Rhode Island since 1890 but closed in the early 1980's after a long and storied history. At its peak Narragansett owned the beer market in New England and brewed over a millon barrels of beer a year.

I am happy to say it is making a come back. In 2006 the brand was revived, and is currently contract brewed in Rochester, NY with plans to open a brewery in Rhode Island this year or by 2011. I wish them well. While technically not a Rhode Island brewed beer yet, this is still a great beer, and if you are in New England it is well worth trying.

Narragansett Lager pours to a beautiful, bright, deep golden color with a tall, thick, white head that stays, and a lively carbonation. The nose on this beer is crisp, with some good pilsner malt aroma and just a hint of grassy hop aroma. The palate is round and clean with good, crisp, pilsner malt flavor. Narragansett Lager finishes with more good pale malt flavor up front, then ends with just enough grassy hop bitterness to balance this beer out.

Narragansett Lager is a very good, golden lager, just like it was a very good golden lager back in its hey day. When I tried this beer again for the first time since the 80's my father visiting from RI, brought me a case of long neck bottles which sport the 50’-60’s old school Narragansett label on them. We enjoyed many a bottle, and waxed nostalgic about the brewery, and my father hoping the GIQ (Giant Imperial Quart) would make its return some day. I have drank this beer many times since then, and love it in the 16 oz "kinger" or "tall boy" can.

Narragansett Lager isn’t going to make beer geeks sit up and spin, but this beer very much is a tasty, golden lager along the lines of Straub, or Yuengling’s Lord Chesterfield. It has good pilsner malt flavor, just enough light hop bitterness, is smooth, clean, and very, very drinkable. A good drinking beer, perfect with a ball game, friends, or some burgers and dogs. This is the Narragansett of my past, this will be the Narragansett of my future. For more information visit the brewery's website at: http://www.narragansettbeer.com/home
Posted by Red Rooster at 6:01 AM