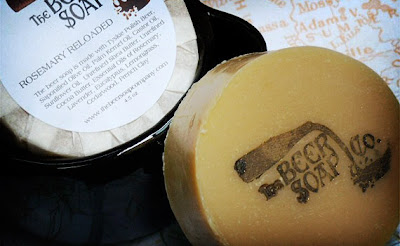 Ever wonder what it would be like to take a bath in beer? There are actually a few brewery spas in Europe that actually do this. I am yet to experience actually taking a bath in beer, but there is a way to wash up with your favorite beer: beer soap. I know a few American microbreweries such as Dogfish Head Brewing of Milton, DE make and sell its own beer soap. There is also a company out there called The Beer Soap Company that makes beer soaps in the variety of beer styles.
You a Sam Adams drinker? Why not take a bath with a bar of Fenway Beer Soap made with Sam Adams Boston Lager. How about a pint of Guinness and a bath with a bar of Draught Beer Soap made with draught Guinness Stout, Olive Oil, Palm Kernel Oil, Sunflower Oil, Castor Oil, Unrefined Shea Butter Unrefined Cocoa Butter. The number of styles and combinations seem to be endless and the Beer Soap Company offers a pretty nice variety.
Clearly these soaps are intended for a specific market and are going to appeal to the beer geek who lives and breaths everything beer. That being said, they appear well made, and I don't doubt they will get you clean and probably smell pretty nice. A little more pricey than your average bar of Irish Spring, but why not give it a try? For more information visit The Beer Soap Company at: http://www.thebeersoapcompany.com/
Posted by Red Rooster at 9:59 AM