Respect Beer? No. Drink Beer: Beer Geeks and why they annoy me 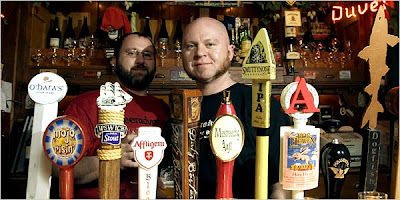 Respect Beer. That is the cute little mantra these two beer geeks pictured here came up with a few years back. Brilliant isn't it? Such a bold and profound statement, it is amazing how the thought was ever conceived, yet there it is. Back in the late 1990's early 2000's the popularity of newsgroups on the web wained, leaving a black hole of space when it came to actually discussing the topic of beer.

A handful of beer rating and review websites quickly filled the void, being at the right place at the right time. Those sites , followed by blogs, and fairly recently Youtube beer reviews have since become all the rage. Beer review sites, beer blogs, and Youtube accounts have become quite popular, boasting millions of "unique hits" and world wide followings. The "beer geek community" had finally found its home on the world wide web. I'm not a huge fan of many of the aspects of these types of sites, blogs and Youtube beer reviews. I think they can be a good source of information about beer, and can be a good place to discuss all aspects of the beer world. That being said your mileage will vary.

Maybe it is because of the popularity, or really the lack of beer review sites, some of these beer geeks  think they are now the "go to experts" on the subject. True beer experts do indeed exist, and had been around a few decades before some band wagon jumpers came up with a niffty little credo. Michael Jackson, Fred Eckhardt, Roger Protz, James Robertson, Alan Eames. These are names that are synonymous with "beer expertise." With the popularity of these types of sites and blogs, the bar for what can be called beer expertise,  has been set pretty low in my opinion. If a beer geek needs to tout his or her "beer credentials" and lets you know they are an expert because of all the things they have "done for beer"? Buyer beware. Geeks like these two have opinions you might want to consider, but by no means should anyone take to what they have to say (or any other beer geek for that matter) as if it was coming from the burning bush. I certainly would not put them in the same league as the aforementioned experts on the subject.

Truth be told? On this level, it really does not take a whole lot to be called a "beer expert". I have a hard time stomaching "beer experts" like these two clods and their ilk. For all the good they have done for the promotion of craft beer (and to be fair, they have), they under cut any credibility that might have truly earned, with their slimy tactics and foolish antics. I have zero respect for these two boobs who have built a site and gained "popularity" on the backs of their contributors. Their sleazy tactics are well documents and these two parasites are really vile people. The whole "beer zealot" thing got real old, real quick for me. I find it more than a little disgusting how beer geeks who run these types of sites, shamelessly whore their sites out and beg for "free" samples of beer. I can not think of a more egregious example than this:

As much as we love to travel and try new beers, we can't visit everywhere and we're not some massive company with an unlimited budget. So if you're a brewery and importer who wants to spread the word about your beer and generate some buzz ... send us your beer and we'll personally review it. { We will only review beer that's sent from a brewery. } It's an inexpensive way to promote your beer and reach a massive, qualified audience via our XXXXXXXXXXXX word-of-mouth network:


Wow. Sadly this is just one of many that openly solicit breweries for beer. Talk about no shame. An inexpensive way to promote your beer? Wow, sounds like quid pro quo to me. How honest do you think these "reviews" of "free" samples are? It makes one wonder, and what if a brewery is not interested in giving a free hand out? Does their product get panned? Or even worse, does a "free" sample beer get an inflated review? Do these clods really think a brewery or any business that manufactures a product is just going to send them free samples out of the goodness of their hearts? They are expecting something favorable in return.

Here is an idea about staying objective about a product. How about actually going out and buying it? Or paying the brewery some money or barter after they send a sample. Its this type of shameless begging I find particularly distasteful. It undermines any credibility these clowns might or might not have actually earned. And don't you dare attempt to be critical on their site or on other sites. They will "ban" you without a blink of an eye, delete your reviews, but of a matter of course, keep all the content you provided to their site that is beneficial to them. Scumbag move "bros."
I love the history, the folk lore, the science, the process, the culture of of beer. I'm amazed by the quality and variety of beer styles, and love beer traditions both new and old. Being a beer drinker, I enjoy hanging out with fellow beer drinkers and the camaraderie of drinking beer in a social setting enjoying the experience as much if not more, than the drink itself. I get all that.

I think the promotion of beer is a very good thing. I think that more people are more aware that there is more to the world of beer than the standard, generic, fizzy, yellow lager, is a very good thing as well. The brewing industry has come a long way in the past 25-30 years, and America has reclaimed its proud brewing heritage with rise of the micro/craft brewery and brewpub. Local beer is a great thing, and one hopes the trend will continue. I get that too.

What I don't get? Beer geeks. It is safe to say I do not respect beer, anymore than I respect a slice of pizza, or a stick of butter. The concept of having to "respect" a beverage that you happen to enjoy, love, or are passionate about is a foolish one in my opinion. I respect the people who brew beer, the people who make it possible for me to enjoy it. I don't respect people who tell me I have to respect something just because they are passionate about it. It is this kind of geekery that can be hard to stomach, at least for me it is. I understand this whole "Respect Beer" thing is a juvenile attempt to "champion" beer, and elevate it to the status of wine. I find that silly, and frankly, geeky. These two jerk offs don't speak for me. What is a geek anyway?

A geek is defined as:

a. A person regarded as foolish, inept, or clumsy.

b. A person who is single-minded or accomplished in scientific or technical pursuits but is felt to be socially inept.

2. A carnival performer whose show consists of bizarre acts, such as biting the head off a live chicken.


I am a beer lover, not a beer geek. These two beer geeks and their ilk can go on respecting beer all they like. I will go on drinking it.
Posted by Red Rooster at 2:52 PM