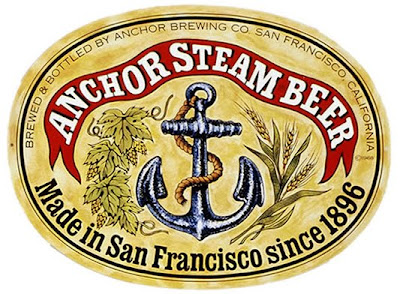 The Anchor Brewing Company of San Francisco, CA, and its owner Fritz Maytag, are legends in the beer world. Fritz Maytag is pioneer in the craft beer industry, brewing craft beer in a time and era when little craft beer could be found. The story goes that Fritz, on learning that the local Anchor Steam Brewery was going to close its doors for good, sold his shares in his family's washer machine business, and saved the brewery in 1965. There had been an Anchor Steam Brewery in San Francisco for over 100 years, but it literally was on its last legs. Fritz took it over, put them back in the black, and the rest is history. A rich, unique, and American history.
See, steam beer is a beer style that originated on the West Coast of the United States. Before the days of refrigeration, West Coast brewers brewed beer with a lager yeast, but had to work with temperatures more suited for ales. So to cool the brew it was fermented in abnormally shallow vessels, but conditioned at warmer ale temperatures. So much natural carbonation would build up when the beer conditioned in wooden kegs that the beer was said to "steam" when tapped.
So what is steam beer? It is a hybrid beer, some where between an ale and a lager, taking the best of both worlds. It has the fruity esters of an ale, yet the smoothness of a lager. Anchor Steam is a world class beer, and the classic example of this unique style.
Anchor Steam pours to a beautiful, bright, amber color, with a thick white head, and a very lively carbonation. The nose is wonderful. Aromas of hops, malt, and fruity esters flood the nose. The palate is firm, some good pale malt and sweet malt flavors, and touches of fruity esters coat the tongue. The body is very round and smooth, making Anchor Steam a very drinkable beer. This beer finishes with more esters up front, and then dries with a pleasing hop bitterness that slightly lingers.
This beer is exceptional. It is a great beer to match with food, and a nice beer to drink more than a few of. I visited the brewery in San Francisco a few years back, and actually saw this beer fermenting away in those shallow fermenters. Anchor actually trade marked the term "steam beer" so other examples that you see of this unique style will not be called steam beer but California Common. For more information on this beer and the brewery, visit their site at: http://www.anchorbrewing.com/
Posted by Red Rooster at 6:48 AM