Hope you have some beer in the fridge. 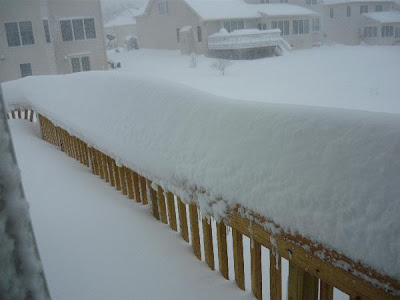 It has been snowing in the DC Metro Area since yesterday morning, and reports say its not going to taper off until sometime tonight. 24-30" of snow has fallen and it is still snowing. The Blizzard of 2010 deserves a few warming beers to say the least. I'll be breaking out a 22 oz bomber of Blue Point Old Howling Bastard (a barleywine by stlye) and a few Bell's Hop Slam (ultra hoppy, warming ale brewed with honey) before and after I brave the elements. The moral of the story here? Always have a stash of good beer on hand.
Posted by Red Rooster at 10:14 AM